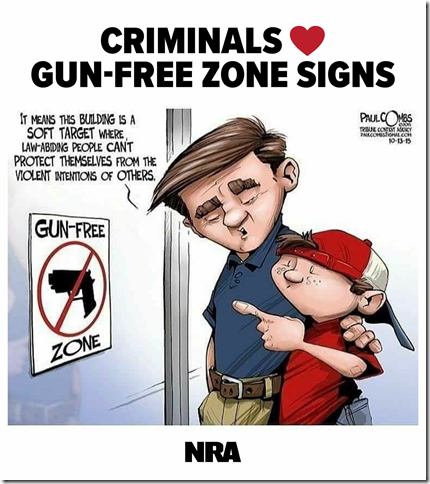 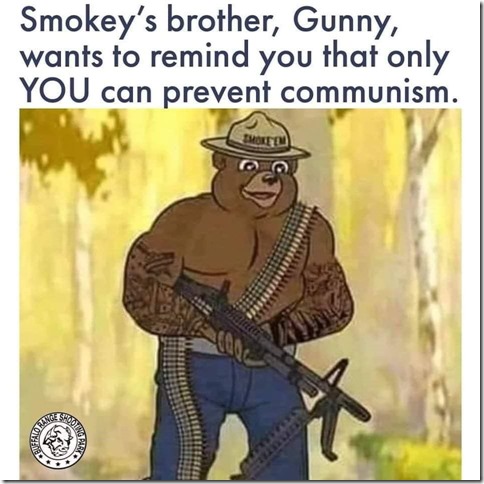 I’m still cleaning and rearranging my bookcase. This is via “Gun News Clips”, published by CCRKBA in November 1996. Edited by James Kielland: 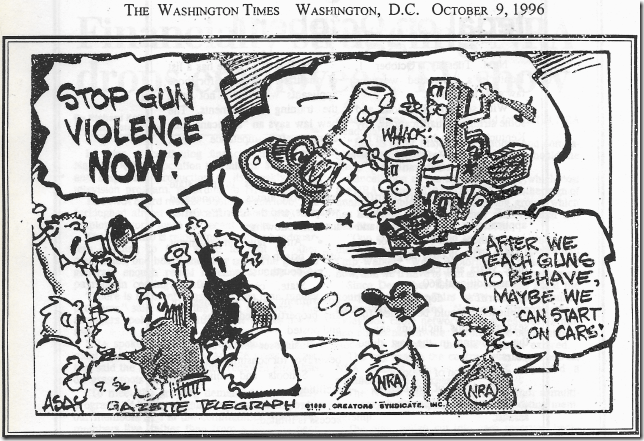 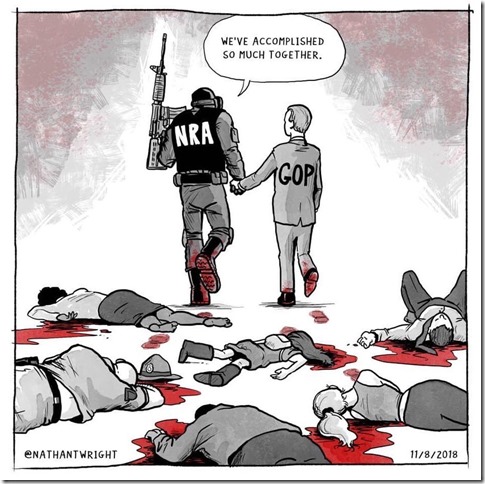 It’s almost mind blowing that they believe this is what we think and how we view the issues.

They are ignorant in so many dimension. This makes them extremely dangerous. Without facts to anchor them they can easily believe whatever they want to believe.

This appears to be correct: 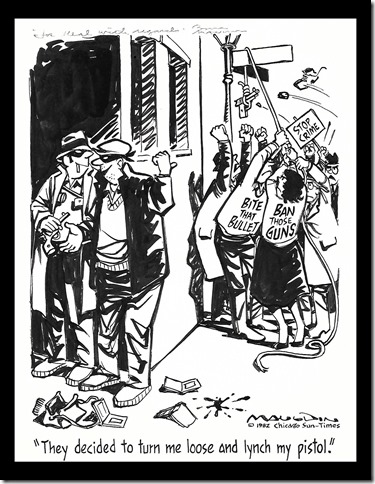 That’s not far off from reality. Alan Gottlieb elaborates.

Gun control is not about reducing crime. It is about reducing the availability of firearms. With this world view increasing crime is desired because it increases the justification for gun control.

That’s some really messed up thinking but it’s the logical conclusion from the available evidence.

We have SCOTUS decisions. They have insulting cartoons.

This is what they think of you:

Who, when they really think about it, can possibly believe that? 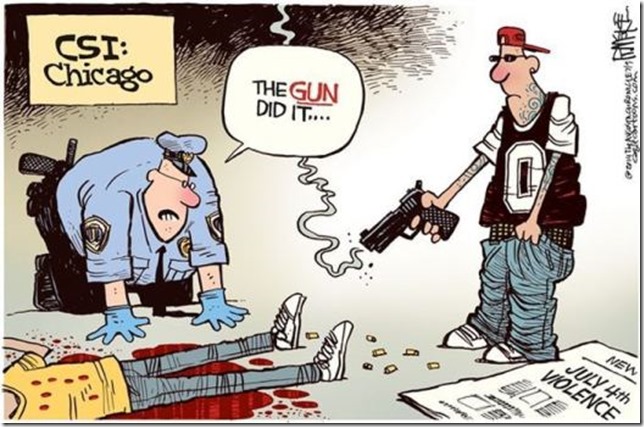 It’s not just Chicago! One could make the case this is the conclusion reached in almost all political jurisdictions controlled by Democrats.

I’m certain that in many cases it’s not what they really believe. It just the rationalization they use to sell their victim disarmament agenda. 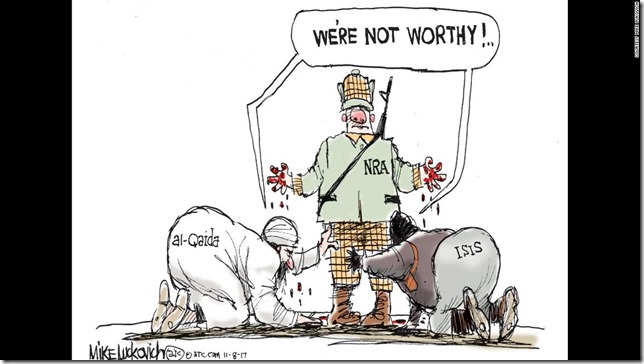 This is a based on what has to be a deliberate lie. Lyle said it best yesterday:

There’s that insidious “Arm Teachers” lie again. “Arm” is a verb. It’s something you’d be doing TO teachers; arming them. As though they don’t get a say in the matter. That’s the big lie in all of this. It evokes images of poor old Mrs. Jones being dragged, kicking and screaming, out of her Kindergarten class and hauled, by grim men in sunglasses, to a shooting range where she’d be forced, crying and shaking, and against everything she believes in, to learn to shoot a 44 Magnum.

In fact all anyone ever wanted was get the fuck out of the way of those teachers who already have training and carry permits, who are already carrying guns responsibly everywhere BUT the schools they work at, and allow them to also carry at school where they could then have a chance of defending innocents should the need arise.

I think part of the problem is that anti-freedom people find it difficult, or even impossible, to imagine a solution to a problem to involve less government.

Closely related, they are unlikely to ever admit that government caused a problem which is now in need of a solution. The “gun free zone” concept was sold as a government solution to a relatively rare problem. The unintended (I’m being generous with giving them the benefit of the doubt) consequences of this was mass shootings in these “gun free zones”. The last number I heard was something over 90% of all mass shootings occur in these victim disarmament areas. Mass shootings are a government created problem. The politicians who implemented these murder zones should be prosecuted.

The whole concept of “free markets and free minds” is alien to them. Alien, scary, and to be fought against with all power at their disposal. And when that power isn’t enough they must diminish the power of those who oppose them. Hence, disarming those who value liberty becomes a high priority.

So we are Russians now! 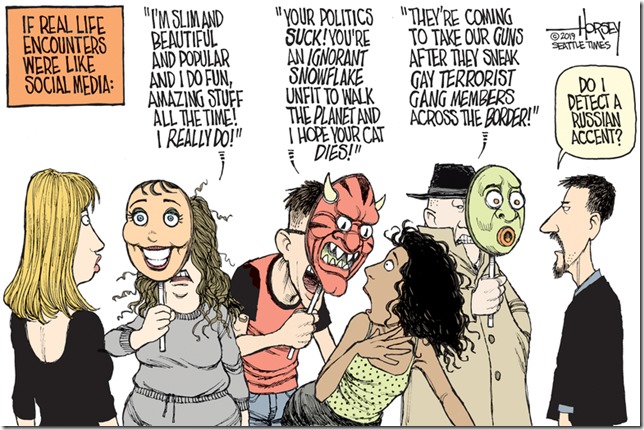 Chet M.
June 11, 2019
Via email. More context here.
[So, what is the cartoonist saying? Concern over infringement of our specific enumerated right to keep and bear arms is imagined? 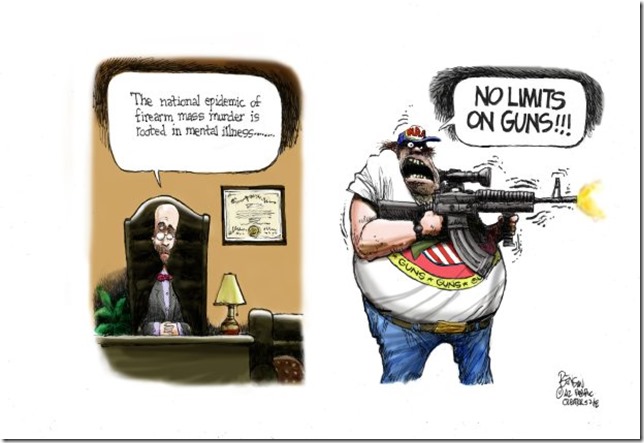 First off, there is no “epidemic of firearm mass murder”. Murder rates are at something like a 50 year low. The mass murder rate in the U.S. is in the same general range as the rest of the world. Unless you want to compare the U.S. with Europe in the 20th century. In that case the rate is far, far, lower. And you know why? Because the so much blood was spilled by governments murdering their own citizens. Closest the U.S. has had that might be compared is some of the Indian wars. And guess what, the North American natives were banned from owning firearms.

Which leads is the main point to be made about this cartoon. The cartoonist

leaves no doubt what they think of the NRA, gun owners, and those who insist the specific enumerated right to keep and bear arms means what it says, “shall not be infringed”.

With such an attitude they are the same path to the murderous behavior of European governments in the 20th Century. If you give up your guns, or even register your guns, we are at a much higher than acceptable risk of a similar result here. 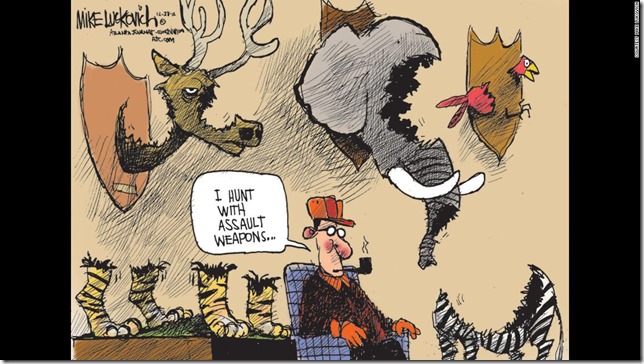 Facts don’t matter to anti-gun people. Lying and ignorance are sources of pride, rather than obstacles, in the pursuit of their objectives.

This is what they think of you and the specific enumerated right to keep and bear arms: 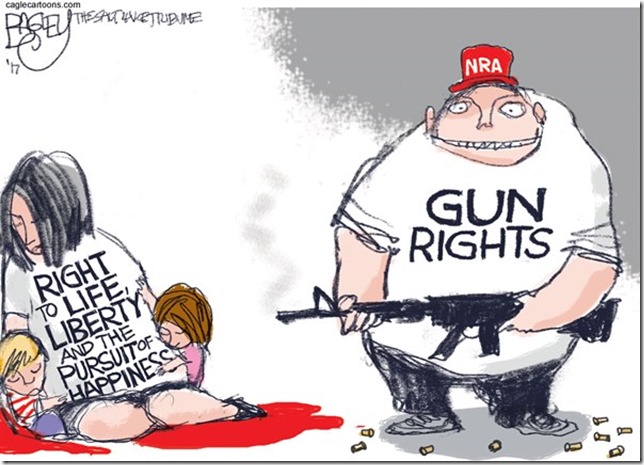 If you are a NRA member you are most likely fat, creepy, and murder innocent people with no remorse.

It’s projection alright, combined with Nazi-style propaganda, promoting fear, loathing and hatred against a whole group of people (and by extension the rights of all people).

Anyone who thinks that might be an exaggeration; go ahead and dig up some of the old political cartoons out of Germany in the 1930s and ’40s, aimed at Jews, and you’ll see for yourself the blatant consistency of both theme and technique.

There’s a Soviet component in there too. If you disagree with what they refer to as “sane” gun laws, it can only be because you are insane. Presumably then, you belong in an asylum.

One can easily make the case anti-gun forces want gun owners to be thought of as subhuman and ultimately arrive at a “final solution to the gun question”. It is being implemented incrementally was in case with the “Jewish Question”:

Most historians agree there is no ‘big bang’ theory for the origins of the Final Solution, predicated on a single decision made at a single moment in time. It is generally accepted the decision-making process was prolonged and incremental.

This makes it extremely difficult to make certain decisions. When do you say they have gone too far and it is time to ignore the immoral and unconstitutional laws instead of giving them just a little bit more such that you don’t run the risk of being caught in noncompliance and risk the well being of your family, your finances, your freedom, and your life?

Gun sanctuary cities, counties, and to some extent even states exist now which may provide some protection. But how long will they last? Support them if you can. If you plan to retreat there make sure there is a place there for you and you are welcome.

We live in “interesting” times.

In addition to the gross distortion of the “in fear of imminent death or permanent injury” criteria to use deadly force into “I felt threatened” there is more to point out here. Can anyone point out a single instance in the last 30 years where a gun control advocate was murdered because of their anti-rights advocacy? How about comparing the mass shooting and violent crime rate of those on the political right versus the political left?

This is projection and “tell a big lie often enough” psychology on the part of the anti-gun people. Don’t let them get away with this.

This is what they think of people with guns:

There are now several states that allow teachers and staff to carry guns in schools. Has something like this ever happened? No. It’s a lie. Lying is an essential part of their culture and we have known that for decades. If gun control comes up in conversations let them know gun control advocates lie about almost everything even when the facts are easily discovered and it does them no good to lie. It’s what they have always had to do to make “progress”. 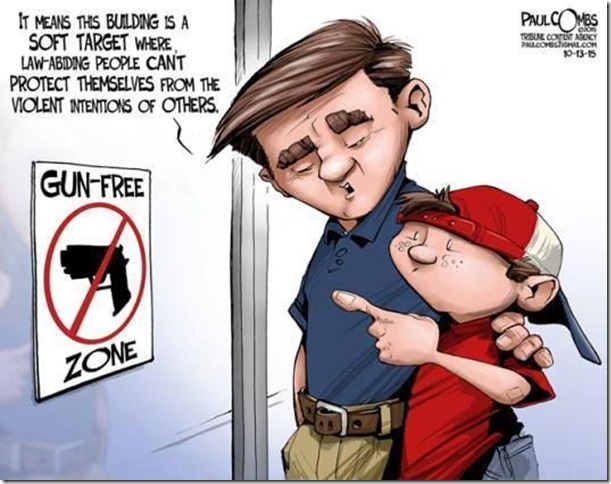 Stay away from such places. You will be safer elsewhere and you will not be spending your money in businesses which are hostile to the specific enumerated right to keep and bear arms.