Yesterday I spent essentially the entire day with Crystal.  That last time I had a visit from the ATF it was Sue that came down from Spokane.  I had spoken with Crystal on the phone at least a time or two but this was the first time I had met her. It had come up in my conversation with Sue that Crystal was very likable and fun to be around.  Crystal is a character.  She was constantly making jokes and laughing.  You have to either like her style of humor or get away because it never stops.  I liked it.

Her card says ATF, not ATFE, and her shirt and coat both have ATF in big letters on them–she calls them her “shoot me clothes“.  While at A&W, where we met, she wore a different coat over the top of her “shoot me shirt.“

We talked about regulations and changes since the Safe Explosives Act, and examined my paperwork.  There was one issue that bothered us both as we sort of danced around the issue for a while.  She said I had to have production records for everything I manufactured.  I knew I had to have storage records for everything, unless (I thought) I used the material within 24 hours of it’s manufacture.  She said I needed production records for everything no exception if used within 24 hours.  I couldn’t recall anything like that and I didn’t have them.  I asked to see it in the “Orange Book”. She looked it up and showed it to me.  Ouch.  There it is.  Subpart G 55.123 (b):

(b) Each licensed manufacturer shall not later than the close of the next business day following the date of manufacture or other acquisition of explosive materials, enter the following information in a separate record:
(1) Date of manufacture or other acquisition.
(2) Manufacturer’s marks of identification.
(3) Quantity (applicable quantity units, such as pounds of explosives, number of detonators, number of display fireworks, etc.).
(4) Name, brand name or description (dynamite (dyn), blasting agents (ba), detonators (det), display fireworks (df), etc.) and size (length and diameter or diameter only of display fireworks).

I was sure there was an exemption if it was used withing 24 hours.  She couldn’t recall anything like that and didn’t see it either.  I was looking at the book upside down across the table from her and asked if I could look closer.  She gave me the book and a few seconds later I found what I was looking for.  Just before (e):

Exception: A licensed manufacturer is exempt from the recordkeeping requirements of this subsection if the explosive materials are manufactured for his own use and used within a 24 hour period at the same site.

We both smiled and breathed a sigh of relief.

It was typical Boomershoot weather–raining.  She rode in my car out to the Boomershoot site where she inspected both explosives magazines, did inventory and found my count matched hers.  The magazines were clean, properly ventilated, and built according to specification.

Every year I send the local fire chief (not sure of his exact title) an email a few weeks before the Boomershoot.  I describe the methods I plan on using to prevent fires and loss of materials both during and after the event, and I invite him to show up at any time during preparation, the event, or during clean up.  Recently I have been telling him when the ATF will be out to inspect things and invite him to show up at the same time.  This time he accepted the invitation and wanted to bring the assistant chief along.  It turned out the chief couldn’t get away and just the assistant chief, Don, showed up.  After Don showed up Crystal informed me there was a new requirement for me.  I need to notify the local fire chief verbally, and in writing, of the status of the explosive magazine.  “Joe needs to tell you whatever it is you need to know.  They just want to make sure you guys are talking to each other”, she said.  I need to communicate a little more frequently and with more detail, but basically I had been complying with the spirit of the regulation already.  I think I got some “brownie points” for demonstrating I was a little bit ahead of them on that point.

After we finished up the magazine inspections I told Don we were going to dispose of the 32 targets left over from the last Boomershoot either by shooting them or burning them and he was welcome to hang around if he wanted.  He said no thanks.  He has been a spectator for the last three years and next year he plans to be a participant so there was much novelty in standing around in the rain watching Crystal and I dispose of the targets.  So he left as I loaded up the magazine for my evil black “assault weapon”.  Crystal offered to help set up the targets and I asked her to get them out of the magazine while I positioned them.  I told her I didn’t want her slipping in the mud and getting hurt.  If anyone was to get hurt I wanted it to be me.  About 15 seconds after saying that I slipped, with my hands full of targets, and fell on my ass in the mud.  I laughed.  She was polite enough not to.

We got a back about 25 yards and I started shooting the targets.  Nothing happened.  I tried other targets.  Nothing but holes in them.  The stuff was completely dead.  Okay.  We have to burn them.  I piled up a bunch of them and got out my lighter.  It lit after a few attempts and burned for a short time but not long enough to catch the now damp target box on fire.  The lighter wouldn’t ignite a second time.  Crystal didn’t have any matches and I didn’t either.  I drove over to the neighbors place just a few hundred yards away.  No one home.  I called my brother Doug.  He sent my brother Gary over with newspapers and a box of matches.  I got the first pile on fire with the first match but it took two matches for the second pile.  It turns out the burning targets work pretty well as “smoke bombs”: 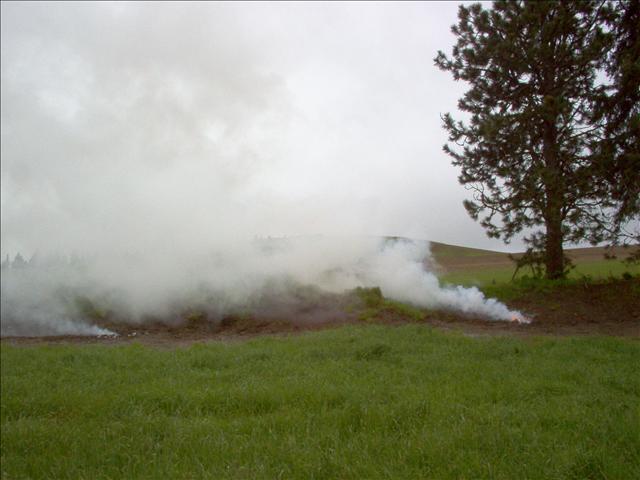 After the fires were out we drove back to Moscow laughing and telling stories.  I dropped her off at her car, went home, took off my muddy and wet shoes, socks and pants at the door and called it a day.  A very good day.  A welcome change from the rest of my week.

What’s the difference between the person who hits you and the person who ties your hands so that someone else can hit you? Whoever takes away your ability to defend yourself needs to be defended against.