So, my Former Classmate I talked about the other day came back and posted a rant on Facebook:

Personally I don’t like guns and superbly do not agree that there is any NON military need for many types of guns available to just anyone.
But what I am absolutely sick to death of is the flaccid guns laws in place. And just as sick of the blockade the criminally financed fucking NRA puts up against any laws that would make harder to buy a gun.

If you are TRULY a responsible gun owner what is your big bitch with doing what CAN be done to mitigate murder by gun?

Your …crappy example of what happened in Paris ( sad as it was) is poor at best when you look at ALL the stats. Gun ownership and gun murders by country.

The USA has the highest gun ownership AND the highest death by gun.
IF IF IF you are a responsible gun owner then keep your bloody masterbatory toys but you MUST know the ease with which you bought them was just wrong. And you know you have gun owning friends that pushed just a tad would roll a full bubble out of plumb.

If if if you want to be a responsible gun owner then support laws that might make it a modicum harder for assholes like the Orlando murderer to get guns.

Oh……and my heartfelt condolences to the “responsible” gun shop owner that offered conceal and carry and gun handling classes. He was shot to death by one of his students because some “responsible” person loaded live vs rubber bullets into the students gun.

I found this very telling. The insults, the demands that gun owners “MUST know” things which she believes. She has an extremely low opinion of gun owners and demands control over them. The mask dropped. She wants to be a tyrant and she is dehumanizing gun owners to justify whatever “whatever it takes” to get her way.

Do you really want to have this conversation with me?

As I see it you have the following options available to you.

1)    You can unfriend me. This, of course, would mean that you know your stated beliefs cannot stand up to scrutiny.
2)    You do not bring up the topic again. This probably means you don’t have confidence in your position.
3)    You engage me in a civil discussion on the topic. As someone told me recently, “Rare on FB”.
4)    You ignore me as I dissect your hateful rants.
5)    You research the facts and admit you were wrong.

Your choice. What’s it going to be?

I waited a couple days and then yesterday she made another post, addressed to no one in particular, apologizing for being so hateful.

I’m tired of the gun laws in place as well. What part of “…shall not be infringed” don’t people understand?

But beyond the snark let’s think about this some.

Terilyn wants to make it more difficult to buy guns so there would be less “murder by gun”. This motive is either deliberately deceptive or naïve. The method of murder is irrelevant. What matters is the total murder rate and, more broadly, the violent crime rate.

Private ownership of guns makes self-defense against a younger and stronger attacker feasible. Guns are an equalizer. If criminals have difficulty acquiring guns they will substitute other weapons or chose easier victims. And let’s imagine making guns the most difficult to acquire as possible. Let’s imagine banning them completely. Would that prevent criminals from getting them?

We know the answer to this. How difficult was it for people to get alcohol during prohibition? Or how difficult is it for the average high school drop out to get recreational drugs? That’s right, they can probably score whatever they want within an hour 24x7x365.

Banning guns will be no different. And the harder you make it to obtain guns the less likely innocent people will go though the effort to purchase them and become skilled in their use. And that means they will be less likely to have a gun to defend themselves when they really need one.

So how can anti-gun people claim gun restriction are a good thing? It’s by being deceptive or naïve and only talking about “gun murders” or “gun crime”.

When comparing violent crime of ALL TYPES in other countries to the US we get a much different picture:

So care to guess where the U.S. fits in there?

According to the article I linked to it’s 466. You can verify the US numbers with the FBI here: https://www2.fbi.gov/ucr/cius2009/data/table_01.html

We have still further means of verifying that private gun ownership in the U.S. is not a problem. Look at the rate of gun sales (millions per year) compared to homicide, violent crime, and accident gun deaths in the attached picture. 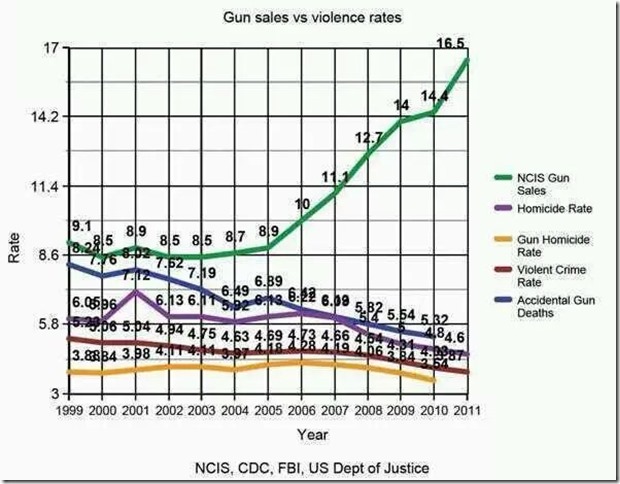 Correlation does not prove causation. But a negative correlation certainly proves that “easy access to guns” cannot be blamed for murder and violent crime.

We have still other means to test the claim that “flaccid gun laws” are a problem. I have been asking a question for over a decade now. And many others, including the CDC and the Department of Justice, have been asking it in slightly different forms without being able to find an answer that agrees with those who want more repressive gun laws. The background for the question can be found here: http://blog.joehuffman.org/2004/12/14/just-one-question/

The question is, “Can you demonstrate one time or place, throughout all history, where the average person was made safer by restricting access to handheld weapons?” The answer turns out to be, “No.”

That question is so popular among gun rights activists that I was asked to put it on a t-shirt (available here: http://www.cafepress.com/theviewfromnorthcentralidaho ).

So the final question one has to ask is, “Since we know private gun ownership does not make violent crime more likely, what is the real reason so many people want to restrict gun ownership?” I’ve been working on the problem for over 20 years now and it’s clear the answer is complicated and not very pretty. I’ll leave that for everyone else to think on and we can discuss it another time and place if desired.

I checked Facebook this morning to see if there was any response. There was. I’m glad I kept a copy of almost everything because I no longer have access to her posts on gun control.

69 thoughts on “The mask drops”