You have to take that sort of moderate, “We just wanna have commmon sense legislation so our children are safe!”

You say shit like that, and then people will buy into it.

Mary Bayer @marybayer3
DNC delegate
July 25, 2016
[See also a shorter version at Say Uncle. I chose this one because it shows her stealing the sign of the people who made the video (the police recovered it from her and returned it to the owners). This demonstrates private property means nothing to her, the First Amendment means nothing to her, and, obviously, the Second Amendment is nothing more than a minor obstacle.

From PVertias Action who made the video: 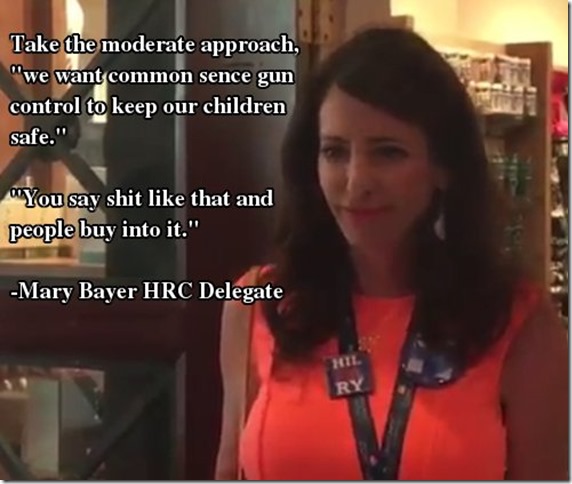 After being included in a tweet about the video she then contacted the police saying that she is being harassed.

As the video says at the end:

Now we know what Hillary Clinton and the Democrats mean when they say, “Common Sense Gun Legislation”…

We’ve known this for decades, but it’s nice to have them saying it on video.—Joe]