Ammal Hassan
April 26, 2022
What The Hell Does Elon Want With Twitter Anyway?
[Really? Musk has repeatedly said it’s because Twitter has been hostile to free speech. He has literally said:

By “free speech”, I simply mean that which matches the law.

I am against censorship that goes far beyond the law.

If people want less free speech, they will ask government to pass laws to that effect.

Therefore, going beyond the law is contrary to the will of the people. 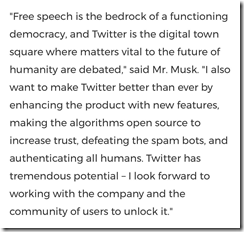 If our twitter bid succeeds, we will defeat the spam bots or die trying!

And authenticate all real humans

What should be done?

Despite all that, this bozo Hassan can’t imagine free speech being the real reason.

From reading some the comments to various threads about the buyout it is very clear that many people are vehemently opposed to free speech. They come close to predicting the end of the world if people are allowed to spread “disinformation, conspiracy theories, and hate speech.”

This is incredibly willful ignorance or, more likely in many cases, deliberate evil.

The “end of the world” is much more likely to occur if we don’t have free speech. The suppression of free speech is the mark of authoritarianism. It enables corruption, gulags, and genocide. This is why we have the 2nd Amendment. It protects the 1st Amendment.—Joe]

9 thoughts on “Quote of the day—Ammal Hassan”