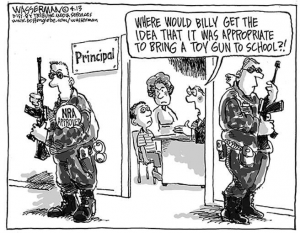 This is one of those things that makes me think our opponents have mental health issues. They think in terms of “messages” being sent rather than in facts and logic. While I recognize there is value in “messages” the problem is they find whatever they want to find rather than the obvious direct messages. In the case of having armed people protecting our children the obvious messages are that we are willing and able to deliver predators a copper jacketed hollow-point message of “Don’t hurt our children!” This sends a message to the children of, “We can and will protect you.”

I dealt with someone for decades that would, in extreme cases, repeatedly insist there were hidden messages in email that communicated something completely different from what was actually written. Verbal exchanges were frequently like walking into psych ward. I would ask a question and they would respond with something that was only tenuously connected to what I asked. Repeating the question would get something again only tenuously related to my question and unrelated to their previous answer. Asking them to repeat my question back to verify they heard the question would result in them insisting they heard and understood my question but they would not be able to repeat it or even summarize it. They didn’t need to be able to do that because, “I know how you think.” They literally insisted they knew what I was thinking and my words and actions were not necessary for them to act upon “what you really mean”.

The people that relate to the cartoon above are like that person. They live in a world that only intersects with ours enough that we can catch a glimpse of their alternate reality.

These people want to control us because their world is chaotic and they desperately want stability. Having a higher authority exercising control over others brings the sense of the stability they seek. For us to say, “No! We will not be unconstitutional controlled by you or anyone else.” increases their anxiety and insistence that we need to be controlled.

I don’t know how this can end well.

19 thoughts on “Gun cartoon of the day”