Via Far Right Of Right@FarRightOfRight: 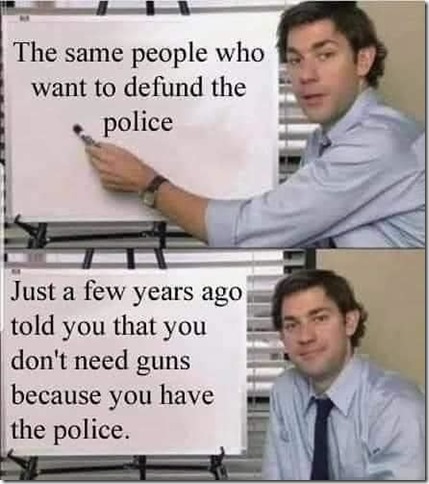 If you think this is a contradiction you probably made the mistake of thinking they were telling the truth when they said you don’t need guns because you have the police. As we have known for decades they have a culture of lies and deception.

With that established fact in mind we can generate hypothesizes and test them against the facts. If we include the newly established fact that they want to defund and abolish the police as we know it what can it mean?

The hypothesis which seems to best fit the data is our political opponents wish to harm us and/or take our property.

I’ve been collecting examples of “They want you dead” for some time now. The recent looting demonstrates the validity of the “they wish to take our property”. That they wanted us disarmed and dependent upon the police followed by defunding the police demonstrates not a contradiction, but consistency with this hypothesis.

Discuss. Then take appropriate action. Consider preparing for Boomershoot 2021. Sign up is here.

1 thought on “Not a contradiction”