“Come and take it” is also a death threat. Given our gun violence crisis, law enforcement must stop giving pundits and politicians who say these things a pass. 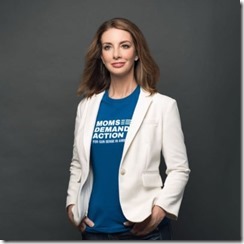 Tweeted on October 11, 2019
[Watts doesn’t just want to ban guns. She is also opposed to freedom of speech.

No one should give her a pass on this. I hope she enjoys her trial.—Joe]

13 thoughts on “Quote of the day—Shannon Watts @shannonrwatts”