If only you 2A yahoos were being killed, there would be no need for Miss Gonzalez’s movement. Unfortunately, it’s innocents who are paying w/their lives. 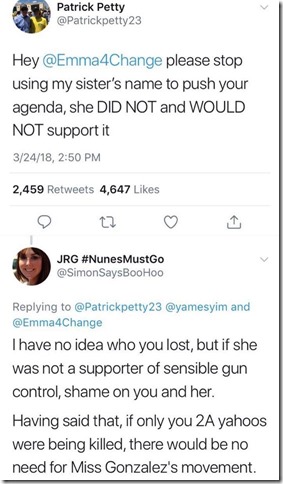 JRG #NunesMustGo‏ @SimonSaysBooHoo
Tweeted on March 24, 2018
[This is what they think of you: If you are a Second Amendment supporter you are not innocent. Your death would make the world a better place.

In other words, they want you dead.

Don’t ever forget the most important reason to own guns is to protect ourselves from progressives.—Joe]