A former high school classmate asked a question on Facebook the other day (please ignore the typos and incorrect wording):

A well regulated Militia, being necessary to the security of a free State, the right of the people to keep and bear Arms, shall not be infringed.

Somebody. (Terry or Dale or Joe R) PLEASE tell me how outlawing guns that are for nothing other than shooting as many people as fast possible as fast as possible is infringing on you?? Keep your hunting gunS, keep your concealed pistonS, (you can still hunt and shoot and wave them around right??) but the type used in FLA?? Why ?

It resulted in an online discussion with several former classmates then into private messages between her and I. I present it here because I think it is instructive that principles and court decisions are sometimes useless in changing peoples minds. But that if you can find the correct pathway into their mind you do have a chance. Or at least you can avoid being thought of as avoiding their questions.

What follows is not the entire conversation. There were other things said including talk about our grandkids and being invited to visit them next week and responses to/from other people that would be somewhat distracting and irrelevant to my point:

Joe: Read the Heller decision from the U.S. Supreme Court. The important part relevant to this discussion is that guns “in common use” are protected. The AR-15 style rifle is the most popular rifle in the country with many million in circulation and certainly qualifies as “in common use”.

Also, this style of rifle is not “for nothing other than shooting as many people as fast possible”. It is used for hunting, self-defense, competition, recreation. Occasionally someone uses it illegally with tragic results but this is very rare. It is so rare that statistically you are much more likely to be murdered but someone using their feet than a rifle (of ANY type).

FC: Can I ask a question. Do you REALLY use it for hunting? does it not desiccate what you shoot with it??

Joe: I only went hunting one year and I used a much more powerful gun. A .300 Winchester magnum. Which fires a MUCH more powerful round. The AR-15 shoots what is considered a medium power cartridge which is so weak that in some states it is not allowed for use on deer. It is typically used to hunt coyotes, prairie dogs, ground squirrels, and other “varmints”. The smaller cartridge in this picture is a cartridge for an AR-15. The .300 Win Mag is the larger one.

If you want to see for yourself l would be glad to let you fire both types of guns (or many others for that matter) at pieces of wood, pop cans, milk jugs filled with water, whatever, and see for yourself. 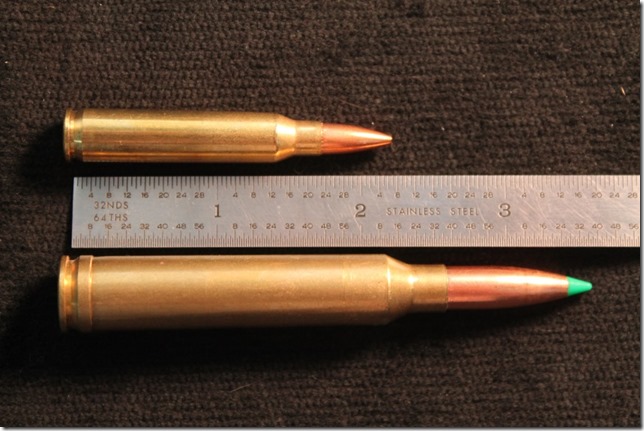 FC: [High school boyfriend] took me rifle hunting back in 1972. We did target shooting (and kissing) but then I spotted a grouse and shot it. There was nothing left but a raft of feathers. I cried and promised God I’d never shoot again.

Joe: I had a somewhat similar emotional experience (without any kissing of [her former boyfriend]). I was probably in about 7th grade and shot a small bird with my BB gun. It didn’t die. It was wounded. I had to shoot it probably five or ten times before it finally died. It was awful.

The next animal I shot was a rattlesnake on a trail near Dworshak Dam when I was hiking with my kids who were about 8->12 years old. That one I didn’t feel any guild over.

The last animal I shot was a deer in 2005. I had been unemployed for several months and money was a bit tight and the deer eating the crops on the farm were plentiful. No guilt that time either.

FC: Just you and me Joe cuz I REALLY want to understand. Knowing what these types of auto or semi guns are used for in purely evil forms, am I totally cracked to think that responsible gun owners would give them up if it meant one less Orlando, one less Sandy Hook??

Joe: I wouldn’t say, “cracked”. Naïve, yes. Just a law requiring REGISTRATION of them in Connecticut resulted in less than 10% compliance. Banning of the magazines (erroneously called “clips” by many) for them and requiring they be turned into the police in Los Angles resulted in ZERO of them being turned in. I know of no occasion in the last 10 years of bans of this nature resulting in more than an estimated 10% compliance.

And your question has an incorrect assumption. It wouldn’t mean there would be “one less Orlando or one less Sandy Hook”. The second largest mass shooting body count in this country, Virginia Tech, was done with two handguns. France and Belgium have total bans on guns like this and they recently had terrible mass shootings anyway.

FC: Soooo aside from sharpshooters like that guy in the movie, do gun enthusiasts NEED those guns?

Joe: “Need”? It’s a “Bill of Rights”, not a “Bill of Needs”. That’s a bit of a snarky answer but do we really “need” all the different religions? Or how about trial by jury?

Gun owners don’t “need” to justify each gun that exists on the market. The government must justify, with a standard of no other means being available to accomplish the stated benefit (in legal terms it’s called “strict scrutiny”), any restriction upon constitutionally protected rights.

But that is likely to have you thinking I’m avoiding your question some, so I’ll try to explain it terms that perhaps will make it less abstract.

Handguns are the most common firearm used for self-defense. But they are more difficult to shoot accurately than a rifle. And the recoil from an effective self-defense handgun round is far more than many people, particularly women of slight build, can handle. The AR-15 rifle is very easy to shoot and practice with. And getting solid hits for self-defense applications are almost trivial compared to doing it with a handgun. For at home self-defense many trainers will recommend an AR-15 over a handgun.

“Need”? Do you “need” seat belts and fire extinguishers? Most of the time no. But there are times when some people unexpectedly need the best tool they can get. If the owners of the Pulse night club had a couple AR-15s and staff who knew how to use them, there would have been a lot fewer innocent people murdered last weekend. Did they “need” them?

I think she understands our position better. Or maybe she just gave up on me. In any case I’m pretty sure she doesn’t think of our position as totally ignorant and/or evil. Maybe I’ll find out more if Barb and I visit her next week.

14 thoughts on “A question about NEED”