We are keen to raise awareness of the devastating impact of knife crime and to reduce the number of families affected so we have decided to keep the knife bins indefinitely.

While projects encouraging the surrender of knives are not a single solution to violence, they have an important role to play in inspiring communities to get behind education and preventative measures.

Such campaigns show a desire to address local concerns and Lancashire Police is keen to throw our weight behind them in support.

We’ve been delighted with the response so far, but our communities have told us that they want an end to knife crime and that they want to work with us to make that happen. 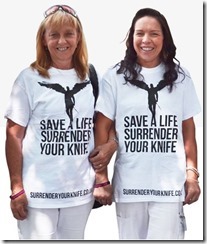 No. This is not satire. Here is another link to marvel at.

This is a culture that has some serious mental problems. They apparently cannot distinguish between their fantasy of good intentions and the reality of criminal behavior. Do they also believe in Santa Claus, the Easter Bunny, and the Great Pumpkin?

This would be our future if we were to surrender to the anti-Second Amendment people.—Joe]

13 thoughts on “Quote of the day—Steve Dowson”