I started repairing musical instruments in the 1970s. My hippie days. Started a business doing that when I was 19. Taxes and red tape slowly turned me, or helped turn me, into a conservative, if by conservative we mean someone who believes that people should stay the hell out of other people’s business.

Anyway it’s difficult to get away from the musical instruments completely. Below is a Yamaha 894– solid silver body and keys, and this one has a custom headjoint made by Drelinger in White Plains, NY. The Japanese have been making some fine instruments and this one is no exception. Each key is like a piece of jewelry, not in the sense that certain guns are said to be “jewelry” but literally.

Every key is fit to its pivots or shaft to perfection. Any tighter and it would bind with temperature changes. One key can have a half dozen or more parts, silver soldered together in a jig and hand polished. The soft pad each key holds must produce an air-tight seal with a light touch to the tone hole, it must do it quietly, and it must usually do it in mechanical combination with one or more other keys, so there is a fair amount of regulation of each key, and more regulation between keys. 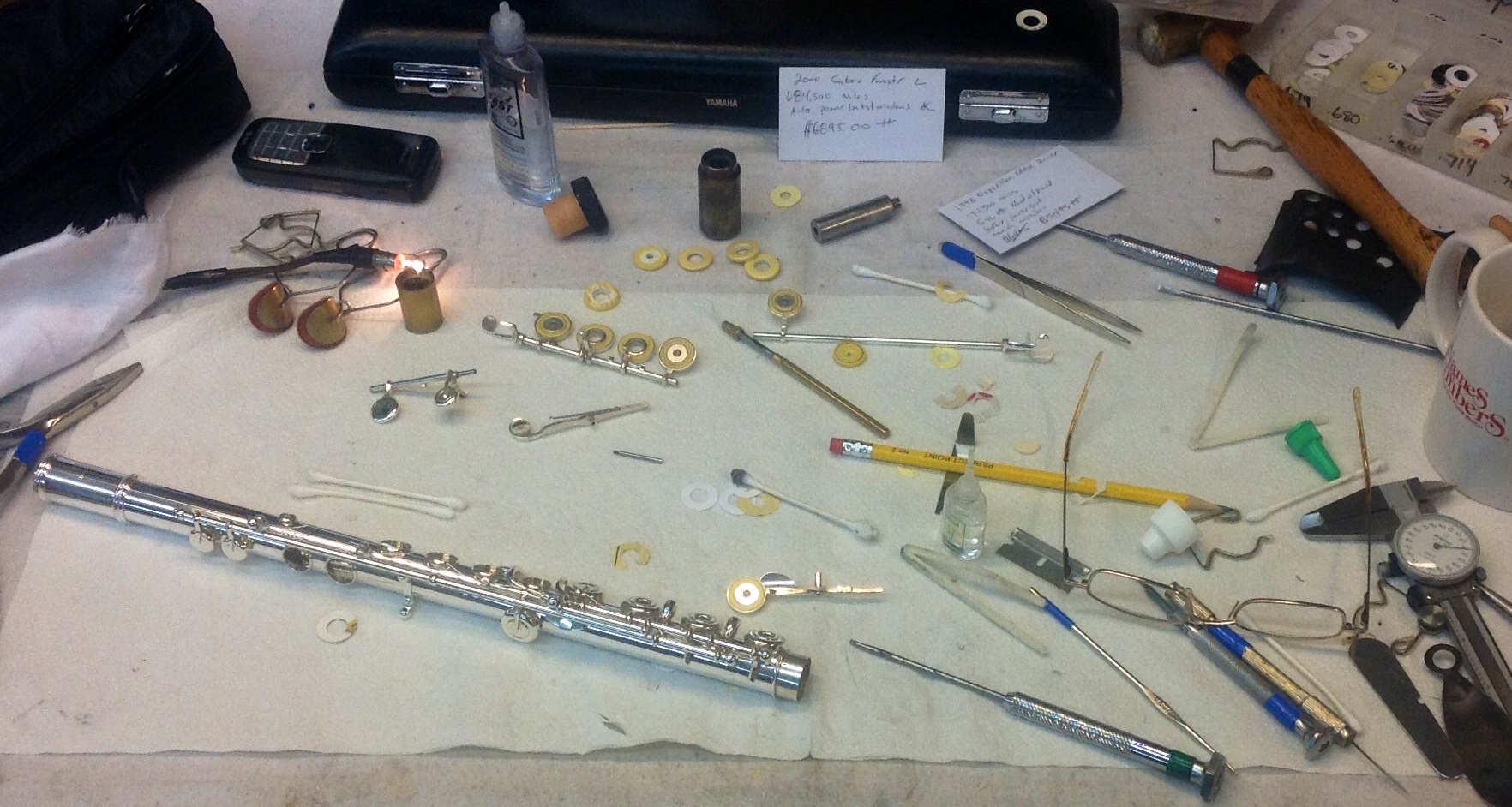 The soft pads are leveled to the tone holes by use of paper shims of various thicknesses. I work with .001″, .002″ and .003″ shims mostly. Mark, remove the pad, cut a shim, paste it on the back of the pad, reinsert the pad, and try. Repeat as necessary, which can be many times per pad. You can see the punches, of which I’ve made several to fit various pad cup sizes, and bits of round shims, and a razor blade for cutting them into pieces. Sometimes you use whole shims to increase the effective thickness of the pad.

If you’re not already crazy it can drive you there. Many, many attempts, by many people (myself included) have been made over the decades to come up with a pad that’s more or less self-leveling and that can still hold up to moisture and all the rest, without sticking or making more noise, and so far it’s still the old felt and bladder skin pad that’s generally preferred.

It takes hours and hours, but I love it when it all comes together and the instrument finally becomes a “single thing” again, rather than the many parts I’ve been working on separately. You could even say it’s music to the ears. Lately though I’m given pause, wondering what good any of this does for anyone.

This flute is one of several owned by the principal flutist in a Northwestern U.S. orchestra, and yes; she knows that her flute is being worked on by a gun accessory corporation president. We’ve known each other for decades. She’s also a university professor and so it is safe to say that our world views differ somewhat. Two worlds. We get along very well all the same.