The guy yesterday that held people hostage at Discovery Channel making demands that they “save the planet” by having a programing agenda that advocated for the voluntary extinction of humans (thanks to Ry for sending me the link to his webpage) will be dismissed as a nut case. This is probably valid but perhaps further consideration should be given to the topic. Don’t forget that not only did this nut case base his philosophy on the work of Al Gore but so did Ted Kaczynski.

We have known for a long time that anti-gun activists have strong violence tendencies. And such things as John Cusack’s “I AM FOR A SATANIC DEATH CULT CENTER AT FOX NEWS HQ AND OUTSIDE THE OFFICES [OF DICK] ARMEY AND NEWT GINGRICH-and all the GOP WELFARE FREAKS” is not all that uncommon.

And of course all the great genocides of the last century were under leftist regimes.

The Animal Liberation Front, and Earth Liberation Front are two of the top domestic terrorist organizations in the U.S. and are, obviously, liberal. Add in the Weather Underground, Sea Shepherd Conservation Society, Symbionese Liberation Army, and lots of other leftist terrorists going back to at least the 1960s and you realize that while they don’t have a monopoly on illegal violence they dominate to such an extent they might as well have a monopoly.

Why are liberals so violent?

My hypothesis is that at some level they know that is the only method by which they can achieve their goals. They, almost by definition, believe in the power of government to “do good” no matter what domain they enter into. They believe in central planning and “From each according to his ability, to each according to his need.” But as George Washington said, “Government is not reason, it is not eloquence, it is force; like fire, a troublesome servant and a fearful master.” Government is force. It is violence. Every dictate of the government is backed up with people with guns who job it is to force compliance.

Those who want to expand government, by definition, want to expand the use of force to achieve their goals. It should therefore come as no surprise that liberal individuals and groups are inclined to use violence to further their goals even outside the domain of government.

This also might explain why most liberals are opposed to the specific enumerated right to keep and bear arms. It explains why they keep insisting, long after the courts have ruled otherwise, that the Second Amendment only protects the power of a state to arm itself independent of the Federal government. The explanation is that they see the willingness inside themselves and those they associate with to use violence and they fear it. They believe they, and everyone else, might use violence in an unethical manner if allowed the tools and the opportunity. They believe in the wisdom of “the central committee” to temper the violent impulses they believe the individuals to have.

This might also explain why liberals accuse the others of violence tendencies. They are projecting the worst fears about themselves onto their opponents.

These violent tendencies can be dealt with at the individual and small group level via the police and the legal system and amount to noise in the big picture of things. It’s at the governmental level that we have genocides with millions dead in the span of a few years. It is at the government level that we must enforce strong restrictions on their power to deliver violence against individuals. This is why we have a constitution that (by design, not in practice) limits governments to a small set of enumerated powers and the Second Amendment to stop a runaway government from becoming tyrannical. One might even be able to make the case that the Second Amendment isn’t only not about hunting–it’s about protecting us from liberals. 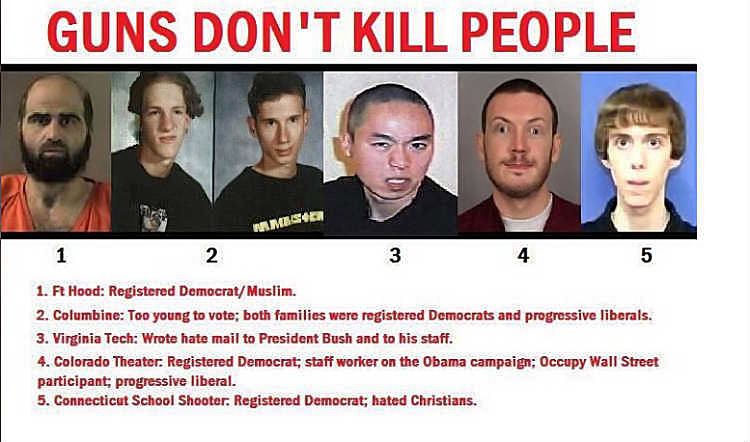 In 1865 a Democrat shot and killed Abraham Lincoln.. President of the United States.

In 1881 a left wing radical Democrat shot James Garfield President of the United States who later died from the wound.

In 1975 a left wing radical Democrat fired shots at Gerald Ford, President of the United States.

In 1983 a registered Democrat shot and wounded Ronald Reagan, President of the United States.

In 1984 James Hubert, a disgruntled Democrat, shot and killed 22 people in a McDonalds restaurant.

In 1986 Patrick Sherrill, a disgruntled Democrat, shot and killed 15 people in an Oklahoma post office.

In 1990 Jame Pough a disgruntled Democrat, shot and killed 10 people at a GMAC office….

In 1991 George Hennard a disgruntled Democrat, shot and killed 23 people in a Luby’s cafeteria in Killeen , TX.

In 1995 James Daniel Simpson, a disgruntled Democrat shot and killed 5 coworkers in a Texas laboratory.

In 1999 Larry Asbrook, a disgruntled Democrat shot and killed 8 people at a church service.

In 2001 a left wing radical Democrat fired shots at the White House in a failed attempt to kill George W. Bush President of the US.

In 2003 Douglas Williams a disgruntled Democrat, shot and killed 7 people at a Lockheed Martin plant.

In 2011 a registered Democrat named James Holmes went into a movie theater and shot and killed 12 people.

In 2012 Andrew Engeldinger a disgruntled Democrat, shot and killed 7 people in Minneapolis.

In 2013 a registered Democrat named Adam Lanza..shot and killed 26 people in a school in Newtown CT.

One scientist confirms the claim that leftist are violent and has a different hypothesis as to why:

Update June 19, 2017: Surveys show that criminal prisoners who identify as Democrats outnumber all other political affiliations combined by a factor of more than two to one.

8 thoughts on “Why are liberals so violent?”