So we’ll lose 100k to Covid and another 100k to self-inflicted dumbass shootings.

STAY FKING HOME @flopperdog
Tweeted on April 1, 2020
[I realize arithmetic, or in many cases even numbers, are not within the domain of knowledge for these people. So, I’ll take care of that for this numbers illiterate. 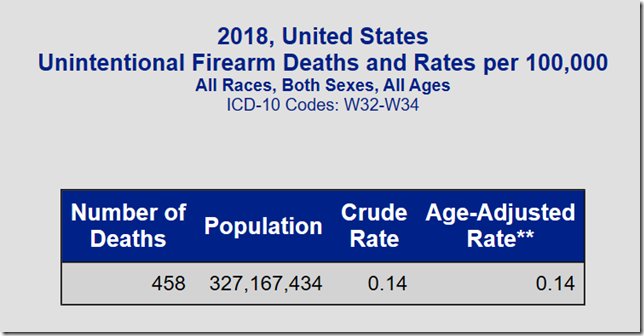 So, assuming a constant population, at that rate it will take over 218 years to achieve the 100k number asserted. Of course the population is almost certainly going to increase instead of remain constant. But, the rate of unintentional firearms deaths have been falling: 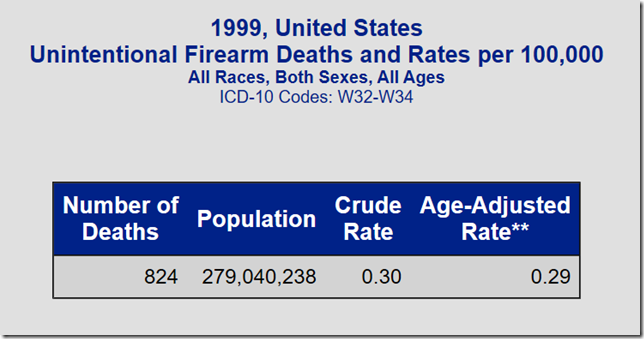 But, of course, the rate could increase some due to new ownership and potential lack of training. But with 100,000,000+ current owners the “worst” case is that the total number of gun owners increases to something like 200,000,000 adults.

Assuming the worst case, all unintentional firearms deaths are due to new owner gun sales inspired by COVID-19, and their rate of unintentional death by firearm is double the existing population for a few years before they are trained it is still far less than 100,000.

My rough estimate is that this dup (or evil) flopperdog is probably off by something like a factor of 25.

Not bad. I expected worse.—Joe]

* Poor assumption. It’s probably going to be closer to a decaying exponential but I don’t want to bother doing the curve fitting to find a better model. Besides, I doubt even one out of 1000 anti-gun people understand linear interpolation yet alone curve fitting and integration.