Items PV3 and PV4 from the CCES involve justifying violence by the inparty to
advance political goals. Terrorism, in other words. PV3 asks about violence today. PV4 asks
for responses if the outparty wins the 2020 presidential election, a hypothetical but realistic
scenario given recent alternation in party control of the presidency. Nine percent of
Republicans and Democrats say that, in general, violence is at least occasionally acceptable.  However, when imagining an electoral loss in 2020, larger percentages of both parties
approve of the use of violence – though this increase is greater for Democrats (18 percent
approve) than Republicans (13 percent approve). 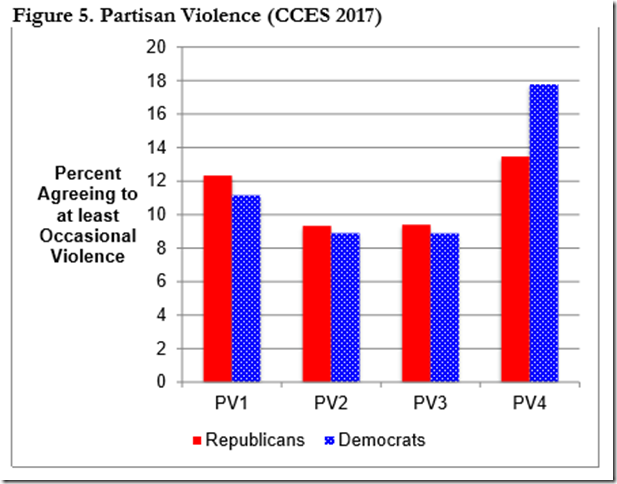 The questions PV1 –> PV4 were as follows:

4 “Unsafe” was replaced with “frightened” in the Nielsen survey.

I’m surprised by two things in this study.

That nearly one out of six Democrats and one out eight Republicans think violence is justified if the other party wins the presidency in 2020 I’m seriously hoping for a Libertarian win (yeah, right, only if the Democrats and Republicans kill each other off at some extremely drastic rate prior to the election) and planning on avoiding what probably will be “hot spots”.

With that high of percentage of violent people available to surround themselves with people are going to find the courage to “take action”. Regardless of who wins, the 2020 election could just be the spark that ignites CWII.—Joe]

8 thoughts on “Quote of the day—Kalmoe and Mason”