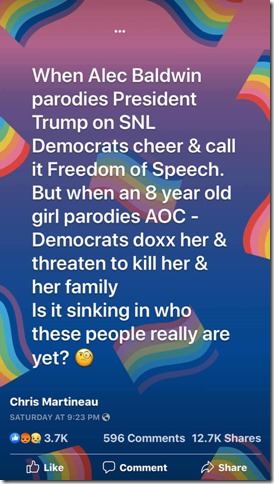 The answer to the question depends on who you are asking if it has sunk in with.

For decades it has been obvious to gun owners who follow the gun control debate “these people” are evil. They lie, they defy clear constitutional intent, they imply they want to reduce crime but it’s abundantly clear that is not the real reason, they insist on banning “assault weapons” even they are only very rarely used in crime, and tell us there is no slippery slope but always come back for more after every victory they achieve.

I think the hard cord Democrats know who they really are. They are for the power. For people to mock and disrespect them creates an incredible urge to destroy even children associated with restricting their access to power. These people have to “know” what they are that they would murder children on their path to power. But it is a small price to pay because those who would restrict their access are not really human. They are deplorables.

The question is, “Does the set of people who are mostly apolitical know who these people really are?” I wish it were true. But I’m not yet convinced they are.

4 thoughts on “I wish it were true”