No point in wasting your time on this bonehead with shit for brains. He just likes to go out and kill things. You know, so he can feel like a real man. 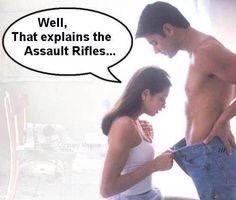