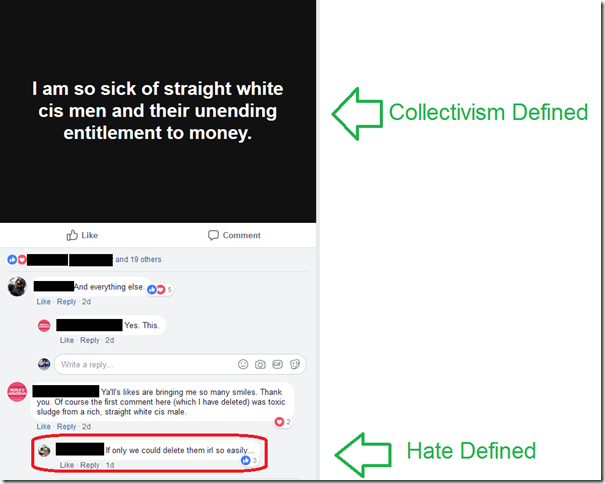 Some of the words are a little difficult to read so here is the conversation in normal text:

Person A: And everything else

Person B: Yes. This.

Person C: Ya’lls likes are bringing me so many smiles. Thank you. Of course the first comment here (which I have deleted) was toxic sludge from a rich, straight white cis male.

Person D: If only we could delete them irl so easily.

I found this on the Facebook page of a person in Seattle.

Imagine publicly stating you were sick of a group of people (such as straight white men), based on an attribute that you assigned to the whole group (greedy!).

You’d never get elected and your friends would stop talking to you.

Unless the target of your rage is straight white cis men.

Then it’s okay when a friend talks about killing 1/3 of the country.

How is this different than how Germans talked about Jews—just before the Weapons Control Act of 1938? This is why we won’t be giving up our guns.