I have pinned this post to the top of my blog. It is to remind people of what many of our opponents want. Alison Aires wants a tyrannical government. They want summary execution for private possession of firearms.

This is why we have a Bill of Rights. This is why I created Boomershoot.

You *can* legislate culture. You just don’t have the guts to do it. Prohibition was half-assed. The war on drugs is half-assed. Let me tell you how you *actually* get guns banned.

You use the fucking data that the NSA has. You check membership in gun clubs, you check the surveillance footage to see who’s a regular at shooting ranges. You check the people who are associated with the NRA. You get yourself a good long list of the people in America who love guns.

Then at random, regular intervals, you do spot checks on them. Stop-and-Frisk them in the streets, get warrants and search their houses, monitor their online activities. Conduct raids and spot checks.

And when you inevitably catch these fuckers with banned material? You don’t haul them into a cushy prison. Once the gavel comes down, you haul their asses into the town square or the main road or whatever the local equivalent is and you execute them. Make sure everyone sees. Make sure they get a good, hard look at the fate that awaits those that disobey the law.

And if people rebel? If people get angry and erupt into civil war? Then you put them down. I do not care if they are MAGA NRA members or poor black people trying to scrape a living. Those who violate the law have no place in civilized society.

Perform things as I lay out, and I guarantee you that America will be free of guns in a year’s time. Except you won’t because you pussies that care more about civil liberties than properly enforcing legislation. 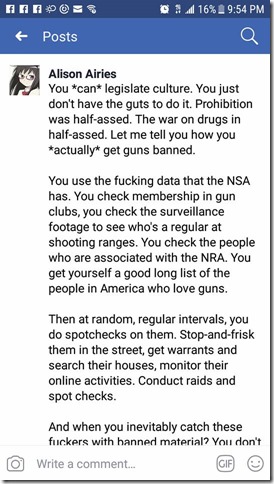 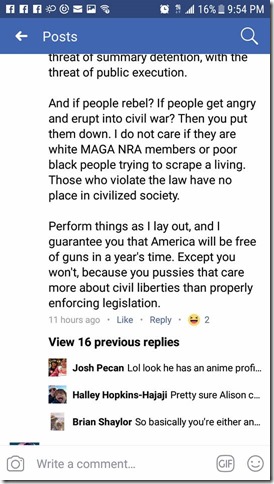 I’d like to thank Alison for sharing. I’ll do my best to make sure her suggestions for “enforcing legislation” is taken into consideration at her trial for violations of 18 USC 241.

44 thoughts on “Alison Airies, thanks for sharing”