We have long known that Boomerite detonates at lower velocities if the bullet has a flatter tip. But we have never had reliable detonation with a pistol. As I reported a few days ago I made up some 145 grain loads for my .40 S&W gun. I bought the bullets 10 to 15 years ago just for this but I it wasn’t until now that I finally got around to loading them for Boomerite testing. With a near maximum load I get just over 1400 fps at the muzzle. The truncated cone bullets have a pretty wide flat area: 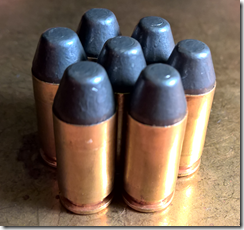 I visited Boomershoot last weekend and among other things I mixed up a batch of Boomerite and tested the hot 145 grain loads. With the weather being a little cold, 34 F, I expected I would have to be pretty close to get detonation. And maybe I wouldn’t be able to get detonation at any safe distance. I put on my flak jacket, eye protection, ear protection, and got back 15 yards. This should be a target velocity of about 1330 fps. I squeezed off a shot—BOOM! Okay, that worked.

How about 25 yards? That would result in about 1280 fps at the target. Another squeeze yielded another earth shaking boom from a seven inch target. Okay then. It’s good enough.

This means I can use my handgun for Boomershoot cleanup if I want to.

12 thoughts on “Detonating Boomerite with a pistol”