I remember reading comics when I was a kid. In high school a friend of mine was very into the X-Men, and some other similar comics. I enjoyed them. Decent stories, cool graphics, etc. Most of the modern super hero movies are based on those old properties, and are pretty watchable. The most recent ones, though, are not. All the good stuff has been used up and wrung out, or dismissed by the leadership as “problematic”*.

In the last few years, though, the major comic publishers have gone totally SJW and are cringingly bad. Storylines are SJW. Dialog is Dem / SJW talking points. Characters change to diametrical opposites. Stupid happens for no obvious reason, and they are hostile to all things American / Western. Thor is suddenly a woman. Excalibur is wielded by a black muslim woman because… reasons(?) Etc.

This is driven by a multitude of factors, from the companies demanding to totally own any new character the writers come up with (so they don’t bring their best ideas), to totaly SJW convergence, to a focus on exploiting old properties in the movie medium at the expense of new developments. As a result, sales and revenues are crashing. Into this intellectual and moral void….

My publisher, Castalia House, is doing a crowd-funding run to raise money to start a line of comics that are decidedly un-PC. Some of the items they are offering are also potentially collectable investments if you are into that sort of thing. In any case, the REEEEEEE! from the left as they squeal like stuck pigs can nearly be heard from orbit already. The artwork looks to be decent and getting better fast, the characters and storyline are interesting. If you or family (like younger males) are into graphic novels and comics, you might wont to consider the opportunity to say you bought it before they made it big. I’m buying a hard-back limited edition as much as an investment as because I think it’ll be a good read. 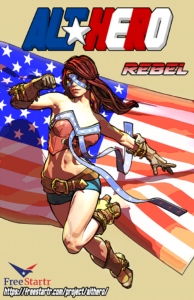 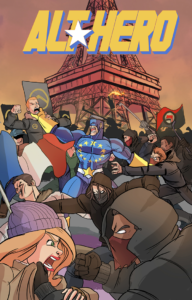 On a totally different but related front, my editor said he’s sent my next book to be published to proofreaders, which is usually the nearly final step before the big PUBLISH button is hit, so it’s possible that by the end of the month Heretics of St. Possenti will be hitting the shelves.