#GunOwners cry about their #SecondAmendment rights but they don’t give a shit about the fact that thousands of innocent people are killed each year by their sinister death machines. It is time for us to do away with private gun ownership entirely. The only people who feel the need to own guns are paranoid, mentally ill people. If you own a gun, you are a terrible human being and if you own a firearm and you have children you should be absolutely ashamed of yourself. A child who is raised in homes with firearms is 43% more likely to die of a gun shot wound. It should be considered abuse to keep firearms in a home with children and the state really should step in and take them into custody. Every gun owner in America is a potential #MassShooter, it’s only a matter of time before the snap and start spraying innocent children. 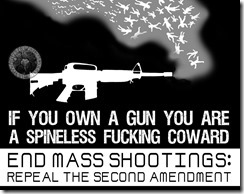 There is speculation this is the work of a troll. But it’s consistent with other anti-gun people.—Joe]