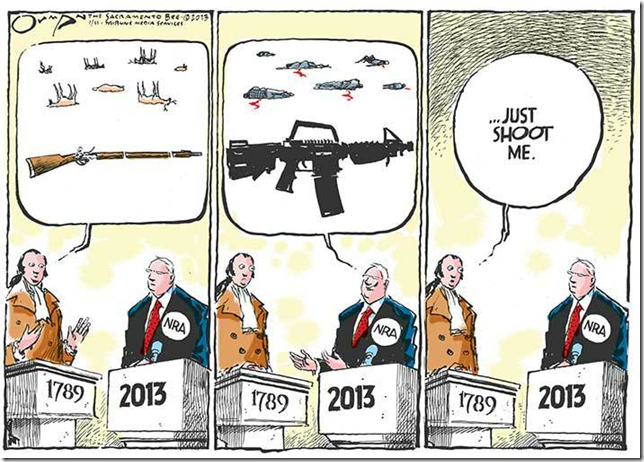 The cartoonist has to be incredibly ignorant or deliberately deceptive to claim the 2nd Amendment is about hunting. They have to have completely ignored or want you to ignore, the first part of it. One of the main purposes of the 2nd Amendment is the security of a free state. It is not the right to hunt animals. It is the right to hunt tyrants and their minions. If this was not true then why would the U.S. Supreme Court rule that unless the arms have:

…some reasonable relationship to the preservation or efficiency of a well regulated militia, we cannot say that the Second Amendment guarantees the right to keep and bear such an instrument.

It is specifically military weapons that are protected by the 2nd Amendment.

Also, as Weer’d Beard has often said, George Washington didn’t cross the Delaware River to get to his duck blind.

One might think it is odd that anti-gun people will claim we ignore the first half of the 2nd Amendment (“well regulated”) but then they do that themselves when they claim it is about hunting. But what you have to understand is that these people have serious mental issues.