Today Barb L. and I went to Flaming Geyser State Park (Washington State). This was the “stomping grounds” of Ted Bundy and The Green River Killer. In fact the Green River runs right through the park:

As we were entering the park I told Barb L. the story of when Barb S. her mom, and I came to the park about 30 years ago. Barb’s mom, Joy, used to tell the story of that visit. Some guy started talking to Barb and quickly left when Barb said that her husband was “just over there taking a nap”. Joy thought the guy was acting strange and she was very suspicious. She would point out that Barb S. looked a lot like the victims of Ted Bundy and her recollection of the guy at the park was consistent with Ted Bundy.

It was sort of a strange feeling as Barb L. and I pulled in and parked. There, just a couple hundred feet away, was “The Green River” so famous for all the women killed and dumped near or in it.

We shrugged off the feeling and found the trail to the flaming geyser. It’s not much. For a while when hole was drilled (coal exploration), back around 1900, the flame would be as high as five or six feet. Now it’s about five or six inches (see also the picture associated with this tweet): 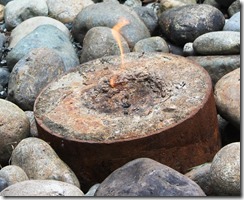 We found a geocache nearby. It was the first one I had looked for in a long time.

We then found the trail that went into the woods a couple hundred yards to the “bubbling geyser”. If you looked closely you could see bubbles coming up through the water. We hung around for a few minutes then some guy showed up on the trail above us with his dog and just stood there. I figured he was waiting for us to leave so I suggested we go because we really came for a hike, not to stand around and talk.

We hiked up the little hill to the trail where the guy and the dog were. The dog really wanted to approach us but the man had him on a leash and held him close. I slowly reached out my hand and let the dog sniff it. The guy started talking to us and told us a little about his dog. Then asked if we had been down the trail by the river to the Indian hieroglyphics. We told him no but that sounded interesting. He gave us directions then asked, “Do you believe in mermaids?” We smiled, and said no. He then started telling us stories about Indian paintings of people with big fins for feet and a hand coming out of fisherman’s nets and taking a swipe at the fisherman. “I believe”, he told us. As Barb and I started edging on down the trail he started talking about the UFOs (see also this tweet).

We strolled on down the trail in the direction of where the hieroglyphics might be. The guy and his dog passed us and disappeared on ahead. We found the trail near the river and followed it for a while in the proper direction until it petered out in thick brush and trees. We decided we weren’t so interested that we wanted to push through the brush. Then the voice of Mermaid Believer came to us, invisible through the brush ahead of us, “The river’s too high. You can’t get there easily now.”

Okay then. Time to head back out. We walked back toward the picnic area with Barb checking to make sure she had her knife with her. I told her, “And you know how to use my gun if need be and I’m not able to do so.” 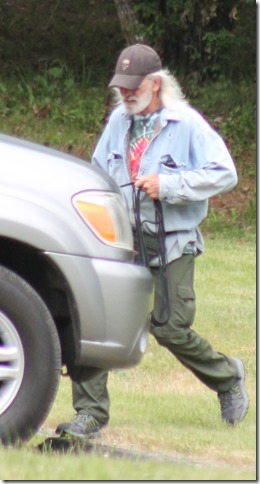 We found another trail and went on up the trail with Barb telling me “women raped and killed while hiking in the woods” stories from the knife class she took last weekend.

Our trail made a loop and we arrived back in the picnic area 20 or 30 minutes later. Mermaid Believer, his dog, and his pickup were gone.

I have just one question for you… “Do you believe in mermaids?”

8 thoughts on “Do you believe in mermaids?”