As I mentioned Saturday morning on Twitter I went to the Seattle gun “buyback” (how can you buy back something you didn’t own to begin with?

I went with a fair amount of cash to buy things that were of historical value or something I might be interested in owning. I had fantasies of buying an AR-15 for $250. No such luck. The sidewalk in front of the site was packed with other private buyers: 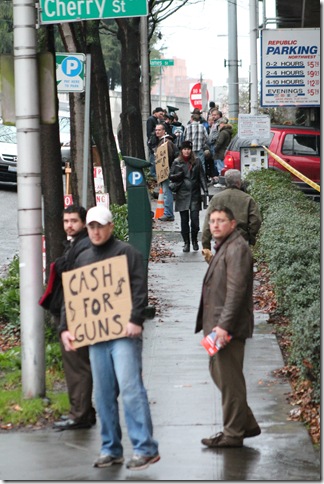 The sidewalks approaching the site from every direction had people on them too: 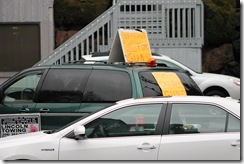 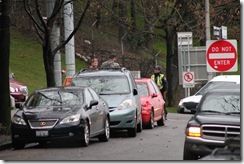 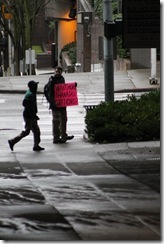 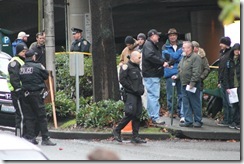 I did get a chance to look a few guns being brought in. I was only interested in one, a semi-auto 30-06 with a Leupold scope on it. Someone else quickly made an offer and got it for $125.

One of the guns, an old shotgun, literally fell apart as the owner tried to hand it to someone to evaluate. Another gun I saw was an old .22 revolver with the muzzle all covered in rust. The guy I was sort of hanging out with told the owner, “You couldn’t get $5.00 at a pawn shop for it.” The owner agreed and said that is why he brought it. A $100 gift card for something that probably wasn’t safe to shoot was a good deal.

I talked to another guy that said he got rid of a junker for $100 as well. It was literally, a “Saturday Night Special” an old Bryco of some sort. He had a great big smile on his face about getting a $100 for that.

I talked to quite a few of the guys there. You could tell who the gun guys were. They were all happy, talking, and smiling. I didn’t take any pictures of them but there were people turning in guns who looked like timid “grass eaters”. Many of them wouldn’t sell to the private sellers. One told the guy I was with, “I won’t sell to anyone without a background check.” The would-be buyer told him that he had a concealed pistol permit (background check required) but that didn’t faze the seller. So apparently it wasn’t about background checks.

I asked several buyers if the police gave them any problems. Only one guy had some problems. He was told he was parked on private property and had his table on private property. Even after he was told he had permission of the property owner the cop continued to harass him and told him he didn’t have a business license and that he was going to give him a “Ticket that will cost you $1000”. The buyer held his ground (before showing up he had asked the Seattle police, the ATF, and a lawyer if it was okay and got the go ahead from all of them) and the cop eventually went away without writing a ticket.

One guy I talked to categorized the sellers into two groups. 1) People getting rid of junk and 2) People who want to save the world. I didn’t have a good sample but it sure looked to me like there were a lot more in the first category than in the second.

There were a few guns of value that made it to through to the police so the politicians, and news media declared success when they ran out of money about 11:45. I have to wonder how many more guns were purchased by private buyers after the police closed up shop. I really need to make a bunch of very cheap single shot guns out of tubing, a piece of wood, a nail, and rubber band or make the rounds at the pawnshops before the next “buyback”.

I hung around for probably 45 minutes before leaving. With all the competition I figured I wouldn’t get my hands on anything of interest and I had other things I wanted to do.

Just as I was leaving the guy I was hanging out with jokingly asked if I had anything I wanted to sell before I left. I told him the only gun I had was the $2000 STI on my hip. He “offered” me $10.00 for it. I told him, “Screw you!” He told me, “I appreciated the offer but prostitution is illegal in Seattle.” We both laughed and I left.