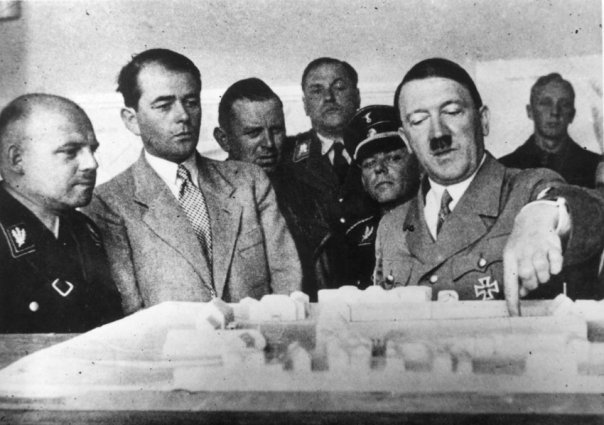 Those are the burnt out ruins of Berlin, after Central Planning had run its course.

The lesson?  Mind your own business.

On the other hand; if mass destruction is your end goal, then by all means centrally plan to your heart’s content, but of course you’ll need your own army.  And it had better be one hell of an army.  You see what happened to that son of a bitch in the photo, and he had, in say 1940, the best army and the best air force, and prossibly the best navy in the world.  He did accomplish plenty of destruction, so you can look up to him I guess, as one of the greatest Central Planners in history.

He, like all Central Planners, of course naturally assumed that he was smarter than all of the People of Europe, or of the world, combined.  It’s always like that– they’re so shockingly ignorant and/or stupid that they think they’re smarter than everyone else, and they are furthermore shockingly stupid enough to think that their towering genius automatically gives them the right to tell us lesser creatures how to live (or not live).

Here’s the clue that maybe you are one of those twisted, nasty, retarded fools.  It’s very simple.  If you see someone minding their own business, and you hate them, and you want to do something about it, you’re a Central Planner.  As a Central Planner, you are of course too fearful to actually do anything yourself about these people who mind their own business, so you’ll seek some official position, or a gang or committee or some such, so you can have other people do your dirty work.  That way you don’t feel like the criminal you are, because other people are carrying the guns for you.  If you had the guts and the initiative to act on these hatred impulses on your own, you’d be what we call a common criminal.

If you had guts, self initiative, and a little bit of decency, you’d be too busy minding your own business to worry about stopping or redirecting someone else’s.  That, and you’d have a vested interest in protecting property rights.

2 thoughts on “Central Planning in a nutshell”