Co-worker Chet stops by my office and chats every once in a while. We both grew up on a farm, we share similar views on the world, and have similar concerns about the current economic situation. One of the concerns is the potential for world wide economic collapse. This has lead us to ponder how we might deal with the collapse of technology. How would or could we survive in a world with greatly diminished supplies of various natural resources such as oil, metals, fuels, and even water (electricity is needed to move it for irrigations as well as direct human consumption). As a consequence of those reduced supplies the food supply would be dramatically reduced. Our total population as well as the distribution of that population would make “going back” even to the time of our childhood (the 50’s and 60’s for Chet and I) nearly impossible without dramatic and extremely painful consequences.

Some of the concerns are that food production today is heavily dependent on oil based fuels, fertilizers, and pesticides. The yields (bushels/pounds per acre) on the farm today about almost 50% greater than what they were when I was a small child yet our food surplus is smaller than what it was then. If we were to attempt to go back to horse powered farm production it would take something like 20 years to increase the horse population adequately and it requires about 1/3 of the farm capacity to feed them.

The food distribution problems are just as bad. The populations of major cities require food (and frequently water) be brought in from at least 100 miles away if not 300 miles away simply because the land within a smaller radius is not capable of supporting a population that size. How do you transport the food with greatly reduced oil supplies? We can’t produce enough fuel on our farms.

Shall we talk about heating? Coal, natural gas, and oil either directly or indirectly via electricity produce much of the heat for our buildings. How are those supplies going to hold up in an economic collapse? The metals to distribute electricity are already being stolen and sold for scrap (H/T to Roberta). Read Doctor Zhivago or watch the movie. It’s a novel but it was based on events from the Russian revolution and civil war of the early 20th century. People will burn their furniture and even their own houses to keep warm. In todays world I expect even pieces of streets and road (asphalt) will disappear in the night to be burned as heating fuel.

Apparently these concerns are far from new. Yesterday Chet sent me an email (bold added):

As we have discussed several times we cannot easily go back to our parents or grandparent’s way of life if we lose today’s technology.

It looks like this idea has been known for some time. I found this quote in ELEMENTS OF TECHNOLOGY published in 1831 (second edition).

“The augmented means of public comfort and of individual luxury, the expense abridged and the labor superseded, have been such, that we could not return to the state of knowledge which existed even fifty or sixty years ago, without suffering both intellectual and physical degradation.”

The civil unrest in the Mid-East is not just something that happens someplace far away. Wisconsin may be the first sign of stress in the U.S. but other states are very close behind and things are going to get far worse before they get better. The attitudes of the people protesting economic belt tightening and demanding revolution will guarantee it. A lot more people need to do a reality check to avoid disaster.

A brief family discussion about these concerns late last year resulted in daughter Kimberly taking it upon herself to read up on how to make your own simple medicines, grow various foods, and we made plans to plant fruit trees on some of our land. Kimberly now has avocados trees about two feet tall and pumpkins blooming in our living room: 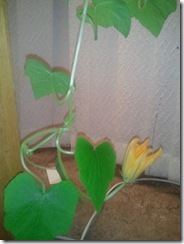 We might not be able to go back without suffering intellectual and physical degradation but some people will survive. Will it be you? Or should anyone even be concerned? I am concerned. Far, far from everyone has sufficient land or a Kimberly in their family.

32 thoughts on “We cannot go back”