On Friday the Seattle PI whined about new gun control laws were unlikely in Washington State anytime soon. Today they added more to the drumbeat for their bigoted agenda with this article and picture: 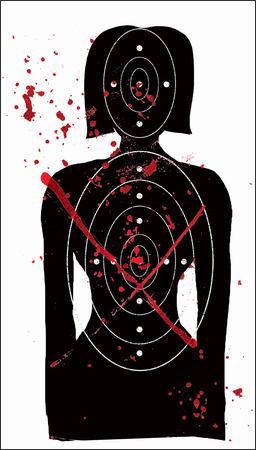 He was much larger than me and had a beefy football-player build and short dark hair — the bouncer type. He was going to get physical if I objected. He was ready to push as we walked quickly past the long row of tables covered with guns and ammunition, past the woman collecting money for admission. Talk to him, I said to myself. Talk to him. I kept telling him I didn’t work for the newspapers as he herded me to the exit.

“No pictures,” he kept repeating.

“No pictures,” he insisted one last time as he opened the heavy door and gently pushed me out. Then he closed the door and left me standing outside with my camera dangling from my hand. A hand-lettered sign appeared outside the entrance: NO CAMERAS ALLOWED.

Thirty minutes earlier I had walked into the public fairgrounds to attend a local gun show in Moscow, Idaho.

Wives were threats. Girlfriends were threats. They are the new scourges of secular life, hunting down unsuspecting men to get bucks and tear out their hearts. Women who talked too much were threats. And women who held public office and wouldn’t shut up were the scourge of the land. I also have picked up bumper stickers at gun shows that said: “I just got a gun for my wife. It’s the best trade I ever made.” Or handouts detailing the “Top 10 Reasons Handguns Are Better than Women,” ending with the No. 1 reason, “You can buy a silencer for a handgun.” I also had seen some pretty vicious materials on Hillary Clinton and Janet Reno. A new fear floated above some of the gun exhibits: judges, lawyers and voters were giving women too much power, and the women were using that power to take guns away from their husbands, their boyfriends and their constituents. A gun-grabber lurked in the heart of the liberated woman.

Please explain to me the difference between this sort of propaganda and the bigoted material that implies black men like to rape white women.

6 thoughts on “Firing up the propaganda machine”