Sunday before last, on the 19th, I had an interesting student. Susan was born and raised in communist China. She is currently a Canadian citizen, recently married my brother-in-law, a U.S. citizen, and is in the process of becoming a U.S. citizen herself.

One of the interesting stories she told Barb and I was that growing up the schools in China taught that in the U.S. there was lots of food but only the rich could afford it. And rather than let the poor people have food for an affordable price the rich would dump the excess food in the ocean. The fact that food is so plentiful and cheap that poor people in this country are obese apparently didn’t make it through the censors.

Susan wanted to learn to shoot a gun because there are times when she is home alone. Barb reserved the indoor training bay at the local gun range and Susan, her husband Mark, Barb, and I went to the range for a couple hours.

At the range one of the first things she told me was that she had never touched a gun before. <shrug> Not a problem. That’s what we are here to fix.

She filled out the paperwork for the range and after we were in the training bay she again told me, “I’ve never touched a gun before.” I assured her that was fine. I will start at the basics and she will do just fine.

After reviewing the safety rules I used a plastic gun to show Susan and Mark the proper grip (photo by Barb): 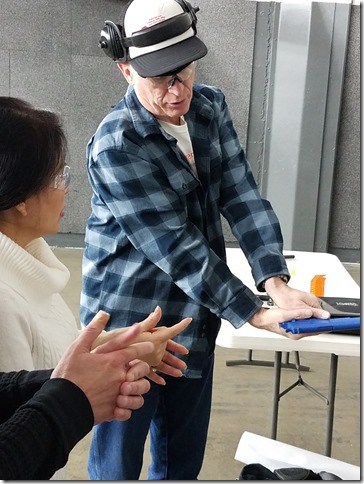 I had taught Mark to shoot a couple years ago but I don’t think he had been to the range since and he was following along with the instructions I was giving Susan.

After she practiced gripping the plastic gun and taking a stance that was approximately correct I showed her what the sight picture looks like with the rear, front, and target all lined up.

We then moved on to dry firing a .22 with a suppressor. The first couple of “shot’s” had significant gun movement. I pointed this out and asked her to concentrate on the following through. No movement of the gun until significantly after the click. Again and again I repeated, “Trigger prep, sight alignment, squeeze, follow through”. After just two or three dry fire clicks the gun was remarkable solid.

I loaded the gun and she fired a live round for the first time. I didn’t see any flinch or movement except that caused by the recoil of the gun but the shot was way high. Odd, try again. Again it was high but a little closer. Again and still high. I looked over her shoulder and could see she was aiming high. I stopped her and went to the target with her and the plastic gun again. I pointed out the front and rear sights and how they should align on the target. I told her to keep the front sight in focus and the target and rear sight would be slightly out of focus.

Still she was shooting high. I encouraged her get the sights lined up on the target but she still kept pointing it way high. At the end of the first magazine she finally got two rounds on the target from about 10 feet away.

After putting in the second magazine she started getting all the shots on the target. She told me she had just been using the front sight at first. Oh! That was the problem. Somehow I hadn’t connected with her on the two sights. She went through several magazines and the groups kept improving. Here is her first target with her new shooter smile:

I put up a fresh set of targets and had her shoot at one target, move to the next, shoot it, and continue until she shot five times. One shot on each of three targets and two shots on the target which was the first and the last shot. Then repeat which would empty the magazine. Repeat with another magazine. She got really good hits and I encouraged her to shoot faster and faster as long as she was getting all the shots inside the rings.

I took off the suppressor to reduce the weight and let her experience more muzzle blast. She shot still faster and never had a miss. Here is her target after several magazines:

I moved on to self-defense shooting. I told her about what I call the four Bs. There are only four ways you can get a bad guy to stop their attack:

Although number 1 is the quickest end to the attack it is a very difficult shot because the head is easy to move rapidly and it’s almost a reflexive move when a gun is pointed at your head. Plus, with pistol calibers the only dependable way to get into the cranial cavity is through the eye sockets. The curved and angled skull can deflect the bullet such that it doesn’t penetrate. Getting a bullet into the eye socket is an extremely difficult shot on a moving target.

Number 2 is a little easier if you are shooting a reasonably large caliber at the pelvis. They can’t get their pelvis out of the way as quickly and reflexively as their head. But the hips, which are most easily broken are still a small target compared to number 3.

The first target should be number 3, the upper chest. It’s difficult to move the chest area rapidly because it’s near the center of gravity. The heart and lungs are a much larger target. These are what should be shot first. If that doesn’t get the desired results after a few shots then start targeting number 2 or 1 (photo by Barb): 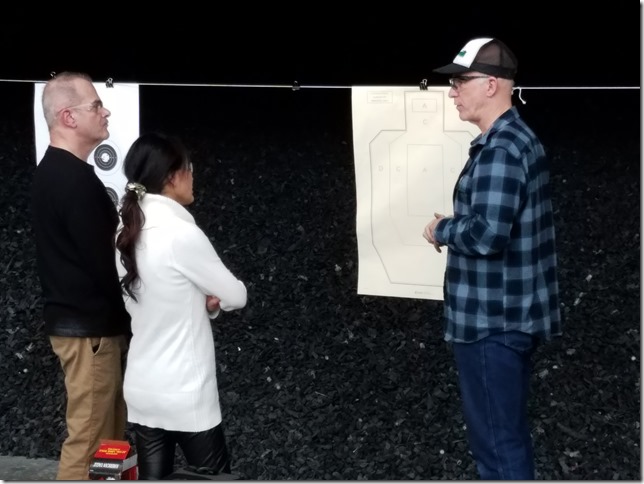 How many times do you shoot? You shoot until the attack is stopped. If they turn and run you are done unless they are putting another innocent life in imminent danger of permanent injury or death.

I explained you can’t shoot someone just because you don’t want them in your yard. You can only justifiably use lethal force to defend yourself or other innocent people from imminent danger of permanent injury or death. Washington state does generally consider someone who has broken into your house, knowing that people are present, as sufficient justification to use lethal force. There are some situations where this is not going to be true. A healthy adult male shooting a 10-year old who broke a window and came into the house is probably going to jail. The resident has to use reasonable judgement.

After several magazines with her shots doing well I had her try my .40 with some powder puff loads. They wouldn’t cycle the gun when Susan was shooting it. I tried to get her to lock her wrists and hold it firmly but she just didn’t have the strength to keep the gun solid enough to cycle. I switched out the ammo to my major Power Factor loads. It cycled with the two shots she took but she was uncomfortable with it and I moved her to a different gun for her defending herself in the inside the home scenario: 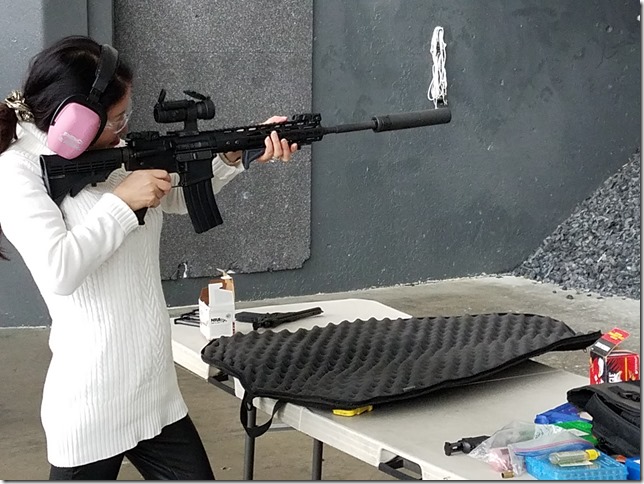 This is a suppressed AR with a red-dot sight. I explained the bullet, even though it is the same diameter as used by the .22 she had been shooting, is moving about three times the velocity. This additional velocity will cause much more damage to an attacker and one or two solid hits will have as much “persuasion power” as a whole magazine out of the .22. Plus it is easier to get good hits. Even from the top of her stairs to the front door of her home she could easily get hits that would be difficult with a handgun.

She fired a few shots with it then I moved her back to about eight yards from the original three or four yards. She continued to get good results but the gun was too heavy for her to be comfortable with it. I took off the suppressor since it’s actually a .30 caliber suppressor and much heavier than it needs to be. I should get one sized for 223.

With the much louder muzzle blast she still did fine and even said she liked that, “Because it will scare them away!” I told her that especially if she is indoors it will require she be wearing hearing protection because it would cause permanent hearing damage to shoot it without ear protection.

Here is her final target:

Our range time was up so we cleaned up and made plans for the next stage of her firearm skills development. I gave them a link to Insights Training for the General Defensive Handgun class. She will need to have her own gun and she needs a little more preparation to be ready for the class. We will go to the range again soon and they will try out various guns to see what works best for them at this stage of development.

As we were leaving Susan again told me, “I had never touched a gun before.” She went on to say, “I thought we would just look at guns today. I didn’t think I was ready to shoot one!”

She did fine. Guns aren’t so difficult that you can’t be safe and functional within a couple hours. You can spend years becoming an expert but you can successfully defend yourself with a few hours of training and practice. Just look at the last target for the proof.