From a reader who wishes to be anonymous:

I took the son to the range today. Not the first time, but we have not been there very many times yet. It was the first time he has fired a center-fire semi-auto handgun. A generic 1911, using standard white-box 230 gr hardball. He had a pretty shot-up target already from the .22 and the 38 special, and we couldn’t tell where he was hitting, so we put out a new target.

This is the result of his next ten shots at 7 yards, loading the magazine one to two rounds at a time, being very safety conscious and paying attention to stance and grip. 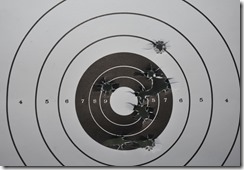 Very nice. Even if it had been a adult it would have been good for that level of experience.

I did a little coaching for a friend I bumped into at the range today. He was shooting a Smith & Wesson M&P 45 at about 7 yards at what looks to be the same size target and only about half of the bullets were within the rings. His grip and stance both needed some help. I then had him doing some dry fire to make sure his trigger control was good. I spent about 20 minutes with him and he was shooting much better when we left but it still wasn’t up to the level of our 11 year-old star above.