Late yesterday afternoon Barb had business in downtown Seattle. I didn’t find out about the “protest” until 5:00 PM on the Internet. This was almost exactly the same time Barb found out about it… as she was walking to her bus stop on Second Ave between Pine and Stewart just a half block from this on Pine:

She skirted the protest as best she could and she got on her bus which was about an hour and fifteen minutes before the shooting started.

The McDonalds you see in the background of the video is on 3rd Avenue – which Barb named Mugme Street. I used to work in a building on that block. I’m sure glad neither Barb nor I have to go there on a regular basis any more.

From the Boston Globe in regards to Seattle on election night: 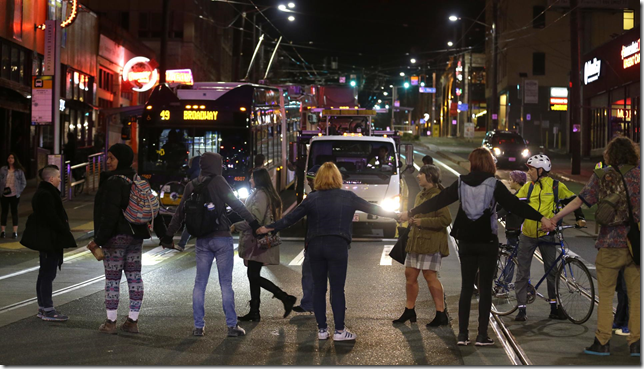 Later the fire department was needed to clean up after the “protestors”:

On election night daughter Jaime was scanning the reddit forums looking for material to satisfy her schadenfreude appetite and found Hitler reference gems like, “I don’t know whether I should just register myself now or wait for the Gestapo to force me to.” and “I’m thinking it is better to kill myself and die with dignity than to be executed in the camps.” And who do we find practicing for Kristallnacht? Yeah, you guessed it. It was the Nationalist Socialists back in 1938 and it was the Socialists on November 9, 2016.

I know it’s irrational to expect people to be rational, but these people are messing up the streets and causing problems for people who probably voted about 80% or 90% for Clinton (the entire county went over 75% for Clinton, Seattle would have been even harder left).

What is it they are trying to accomplish? The answer, I believe, is that it is in their nature to get physical when they don’t get their way through legal processes and they just can’t help themselves. Socialists are nothing but thugs with a thin veneer of respectability and when that veneer gets scratched, they get physical.