I find the topic of progressives and the use of force very interesting. I have been saying for years that it’s part of their nature.

Here we have more evidence of progressives actively engaging in violence to to get their way or to protest not getting their way:

And more recently we have the violent protestors against Trump:

Albuquerque attorney Doug Antoon said rocks were flying through the convention center windows as he was leaving Tuesday night. Glass was breaking and landing near his feet.

“This was not a protest, this was a riot. These are hate groups,” he said of the demonstrators.

Yet in Moscow Idaho which is the most progressive city in the state, when my children went to high school (this was sometime between 1999 and 2002) the school insisted all students sign this: 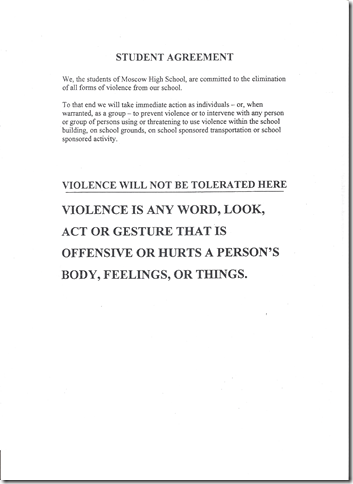 Isn’t that interesting? They redefined the word violence to include words, looks, and gestures that are offensive or hurts a person’s feelings. Not only is self defense against the rules, but a student could get in trouble for “threating” to exercise their First Amendment rights. They are changing the language to achieve their goal of repression of basic human rights under the guise of preventing and stopping “violence”.

It is abundantly clear these progressives need to be educated on the topics of tolerance and human rights.

4 thoughts on “Progressive violence in deeds and words”