Due to an error in the checklist manual, the rendezvous radar switch was placed in the wrong position. This caused it to send erroneous signals to the computer. The result was that the computer was being asked to perform all of its normal functions for landing while receiving an extra load of spurious data which used up 15% of its time. The computer (or rather the software in it) was smart enough to recognize that it was being asked to perform more tasks than it should be performing. It then sent out an alarm, which meant to the astronaut, “I’m overloaded with more tasks than I should be doing at this time and I’m going to keep only the more important tasks; i.e., the ones needed for landing.” …Actually, the computer was programmed to do more than recognize error conditions. A complete set of recovery programs was incorporated into the software. The software’s action, in this case, was to eliminate lower priority tasks and re-establish the more important ones…If the computer hadn’t recognized this problem and taken recovery action, I doubt if Apollo 11 would have been the successful moon landing it was. 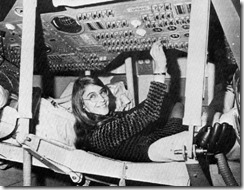 The quote above is just a small part of a great story about Hamilton. I like software, I like space exploration, I like smart women. I loved the story.

5 thoughts on “Quote of the day—Margaret Hamilton”