I decided I should make some low power loads in .40 S&W for new shooters that are recoil sensitive. “Powder puff” loads. After exploring lots of options I came up with these as the best possibilities. From Hodgdon:

Typical factor loads are in the 180 to 190 PF range. So this should be about 70% of the recoil of factory loads.

The difference between power factors of 127 and 131 with equal weight bullets is probably undetectable in your hands. But because the 127 PF load is with 135 grain bullets versus the 180 grain for the 131 PF you get a much different recoil impulse. The lighter bullet is going over 200 fps faster and that means the recoil impulse is much shorter and hence will feel sharper. So, the 180 grain load looks like the winner. That nice because I have lots of 180 grain bullets around.

But I don’t have any Hodgdon Clays powder. I started looking online. Nothing.

So what other options do I have and do I have any powders that could come close to this? I have an older version of the Hornady Handbook of Cartridge Reloading and they list Bullseye powder for a mild load.

I have some Bullseye powder left over from my explosives experiments with it about 1996 or ‘97. This would be a good opportunity to get rid of it. This isn’t as good at the loads with Clays but it is still less than 80% of a factory load.

I loaded up 20 rounds Saturday and went to the range to see if it would cycle my gun and if it was accurate. I used some 180 grain Rainier truncated cone FP bullets I had won at a match this summer. I have had problems with the accuracy of Rainier HPs once I went beyond about 7 yards so I was a bit skeptical of these too.

The ammo cycled and fed well in two different guns. The accuracy wasn’t great at 7 yards but it was far better than new shooters can manage. And I don’t have them shoot beyond that distance anyway.

Today I loaded up 180 rounds using some nickel plated brass I had laying around. I used the nickel plated so I could easily keep track of it being “special”. I’ll load up the remaining 300 Rainier bullets in that configuration in the next couple of days.

It turns out the loaded ammo looks particularly pretty. Barb said it looks like Christmas: 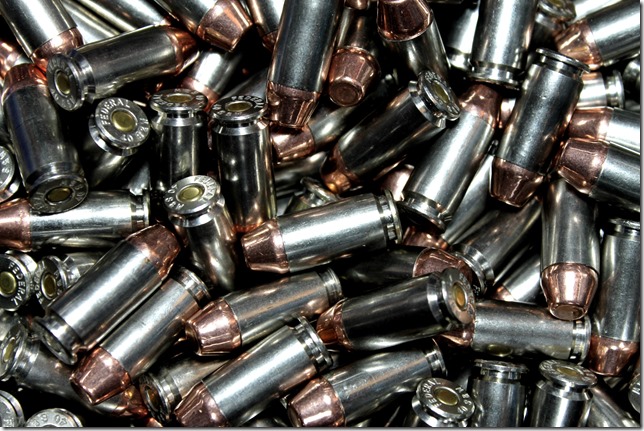 I suppose it does. We have Powder Puff Christmas ammo.