Via a Tweet from Firearms Lawyer we have this article from Business Insider.

From looking at the map it appeared that Idaho was in third place and I was wondering if there might a be a prize for that: 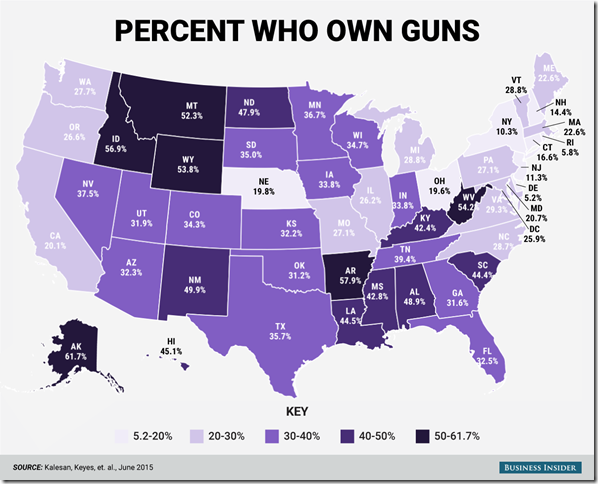 Instead I find this:

Gun cultures may need to be considered for public health strategies that aim to change gun ownership in the USA.

I considered there was a remote chance that the authors would consider it a “public health strategy” to increase gun ownership. But I got a copy of the report and of course they took just the opposite view:

Therefore, we cannot infer whether exposure to social gun culture predisposes one to gun ownership or whether the latter increases likelihood of participation in the former. However, this is not particularly germane to the observations being drawn here, suggesting simply that prudent gun policies that aim to reduce gun ownership and gun-related injury might need to actively consider the prevailing social gun culture in the USA.

This report confirms something we already were pretty certain of. Gun ownership is more likely when you have friends and family that own guns. If you want to be able to keep exercising your specific enumerated right to keep and bear arms you should “come out of the closet” about being a gun owner and take friends and family to the range.

And don’t ever let anyone get away with telling you that no one wants to take your guns.