It seems to me that the process of reading pressure signs in your brass and primers, as they tell us in the loading manuals, can be a bit ambiguous. In this instance however it was rather obvious.

It’s a Glock 40 S&W with a Lone Wolf barrel. The case blew out at the space above the feed ramp on the barrel, where it has less support. The Glock’s extractor was blown away into Kingdom Come, leaving the extractor spring and plunger hanging out. The trigger was blown down and out of the frame. The magazine, damaged but still in one piece, was blown down and out of the frame, breaking the mag catch in two and driving the magazine into the pistol bag he was using as a rest. You can see the outline of the magazine floor plate in powder residue in the fabric, stenciled in powder residue.

Where the trigger and mag catch used to be 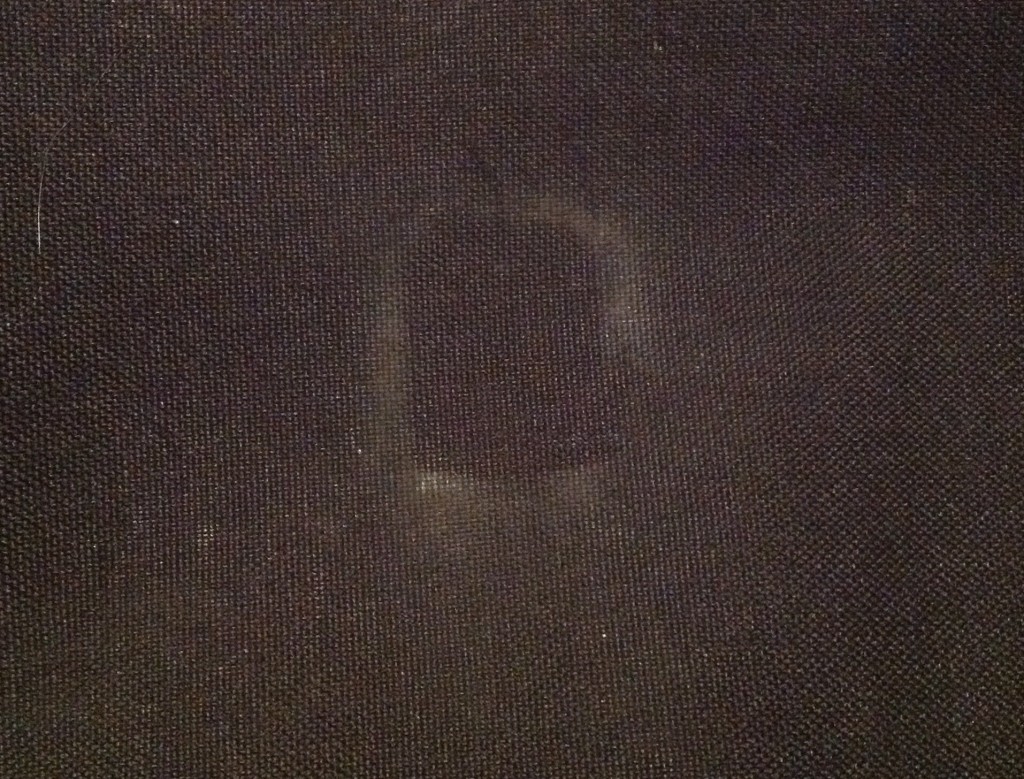 The shooter’s right (strong) hand was cut, apparently from the extractor turned projectile. The index finger had a long, narrow blood blister on it, caused by gas pressure escaping between the slide and frame. He was peppered by small bits of brass, from the chest up to the face, leaving little blood spots, but all superficial. He’s perfectly OK, really. Nothing that will leave a permanent scar. Good eye protection saved his sight. 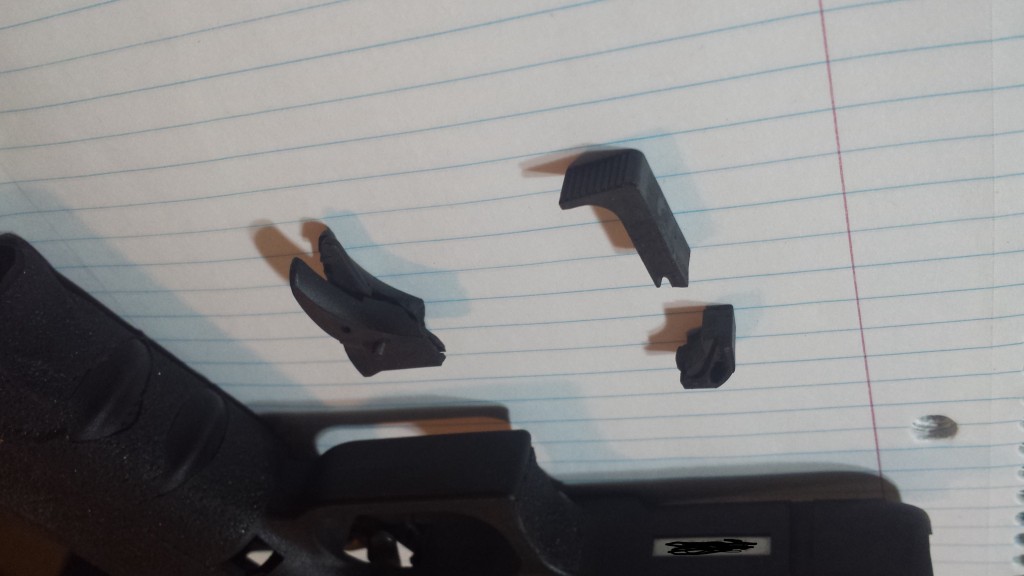 Remnants of trigger and mag catch

I felt the concussion all out of proportion for the pistol, as he dropped his head and chucked the pistol onto the shooting table. “That didn’t sound right” I said. Duh. I took a couple seconds for him to reply, as I assume he was internally reeling from the violence of the event, trying assess the extent of its seriousness.

After seeing that he appeared to be OK, we took a close look at the pistol. It’s interesting how the mind perceives things according to context and expectation. I thought the frame had been torn up pretty bad at first, but it turned out that my mind had just made that up. For a moment I had actually seen something that wasn’t. So much for me as an on-the-spot eye witness. Upon close inspection, the frame actually seemed to be fine. It was missing the trigger and mag catch, but otherwise it looked as though it could be reassembled with a few new parts and would function normally. 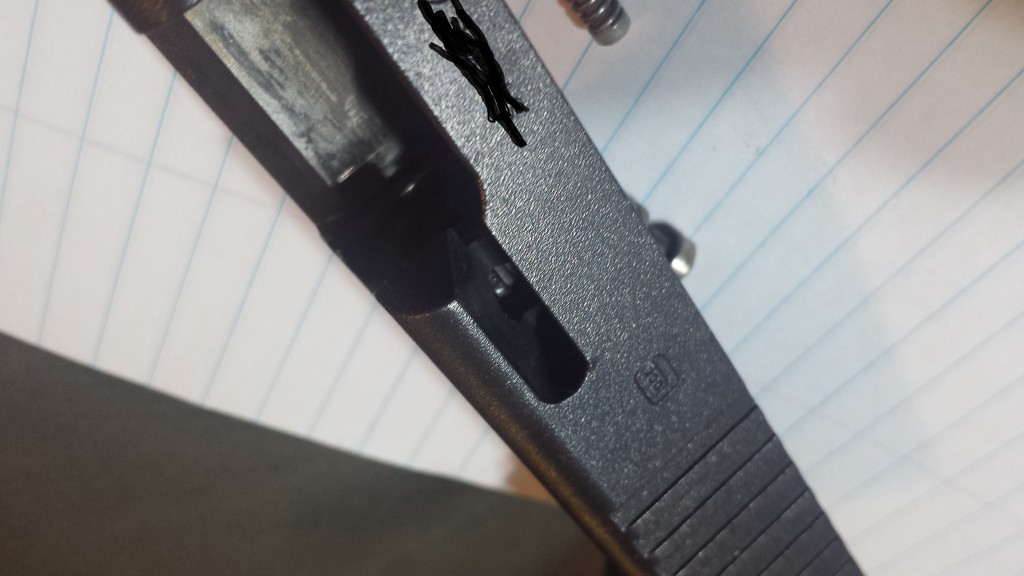 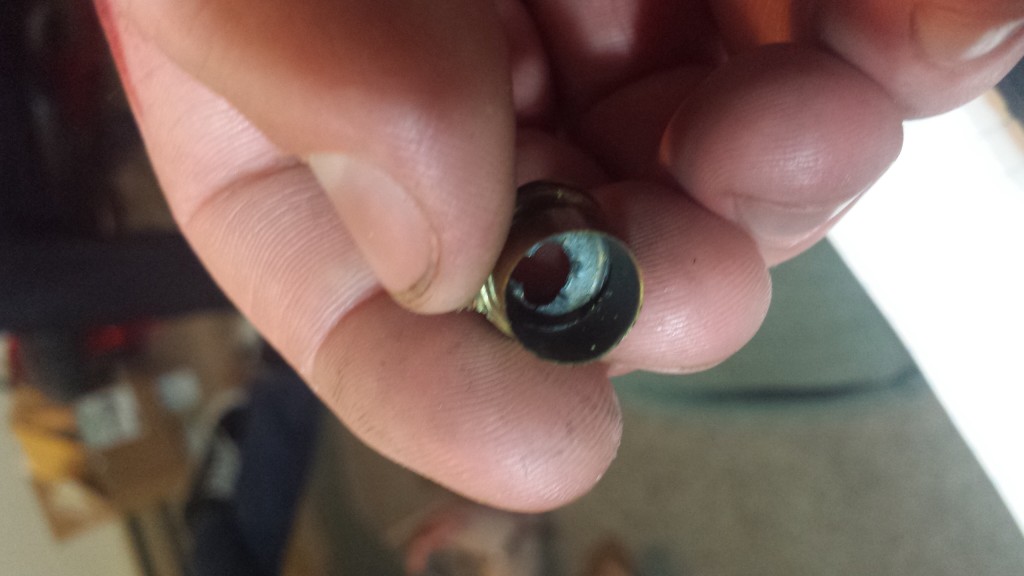 I advised him to have it checked out before using it again. Kudos to Glock and to Lone Wolf though, really– The barrel, slide and frame all seem to have taken the extreme offense without apparent damage. I figure that a Glock barrel, with it’s deeper cuts into the chamber for the feed ramp, might have let more gas into the frame, causing more damage, though that’s just my theory. Certainly there is more case support with the Lone Wolf chamber, and certainly that helped to direct more of the energy out through the barrel.

The gun was locked up in battery after the kaboom. Somehow the striker had been re-cocked over the trigger sear, because I had to use a screw driver to push the trigger bar back so it would let go of the striker before we could remove the slide. I believe the striker was blown back by gas pressure to reset. That seems likely enough, given the looks of the flash hole in the cartridge case. The barrel never unlocked, as the case head flowed out and filled up much of the square space inside the slide near the breech face, effectively “glueing” the barrel and slide together. The web portion of the cartridge case also flowed (extruded) backward and “accordioned” against the case head. It took some surgery with a hammer and punch to extricate the barrel from the slide. The case was completely separated in two, forward of the web, or about midway on the case. 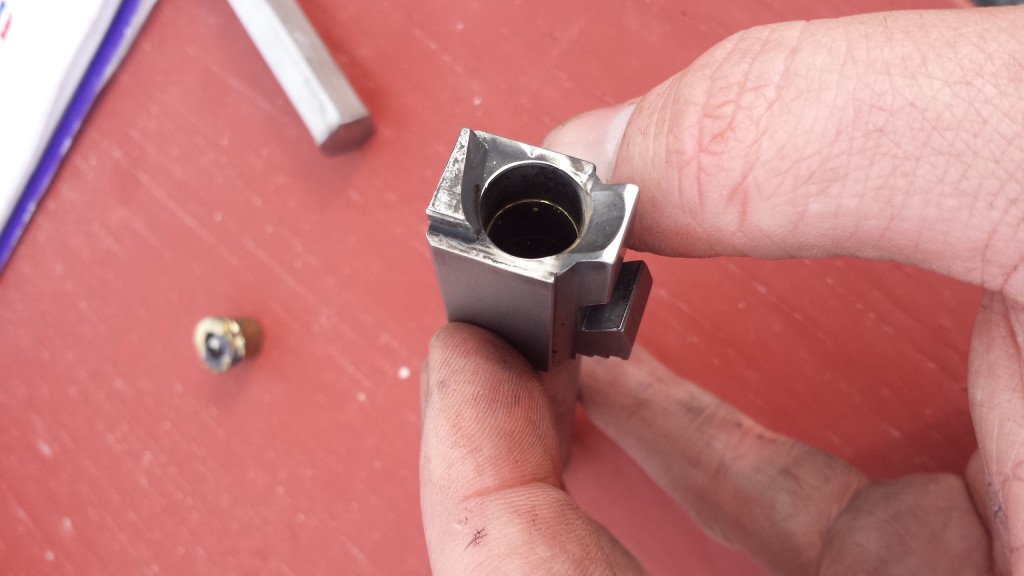 Remainder of case, stuck in chamber

Pretty obviously an over-charge. Though new at it, he said he was well aware of the potential dangers of reloading, and was being extra careful with charge weights. Probably a carefully measured double charge.

He’d gone on quite a bit about how careful he’d been to calibrate the scale and meter the powder and such. That’s all well and good of course, as far as it goes, and this is a concept with which I’d become very familiar in the audio business; it ain’t the equipment, necessarily. It’s the operator. I don’t want to embarrass the man (we ALL fall prey to the over-reliance on equipment and numbers at times, when we should be looking elsewhere for our salvation) but to uphold the concept.

Afterward, I asked him to measure out two of the charges of the CFE Pistol powder he’d been using, and sure enough; a catastrophic double charge fits the little case fairly well. His intended charge was six grains, so he tried 12.7 grains. Though some powder compression would take place upon seating the 180 grain bullet, a double charge is certainly doable. The photos show an empty case, a charged case and a double charged case, plus all three cases seated using his regular die setting. The double plus charged cartridge OAL came out 0.015″ over target; not something you’d notice without a cannelure, necessarily, unless you measured every finished round. Note the only visual clue is a slightly more pronounced pressure ring on the bullet from the seating stem.

Hodgdon lists the max charge of CFE Pistol for a 180 grain bullet in that caliber as 6.5 grains, so yeah; twelve or more is rather too much. 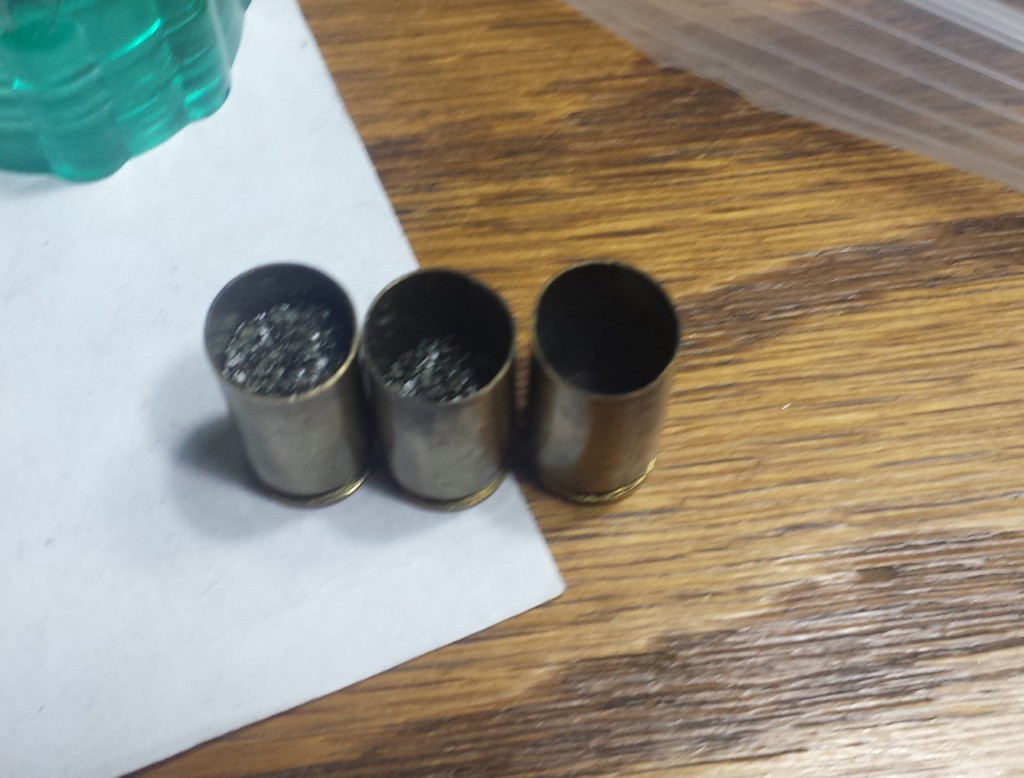 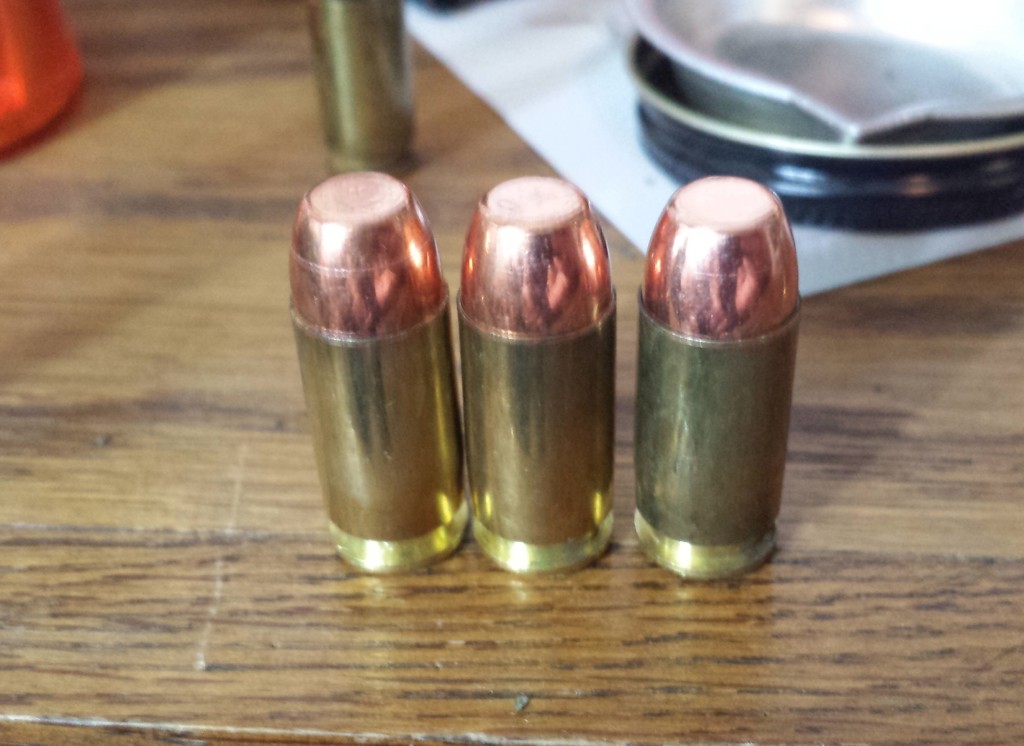 Double charged and seated. Looks fine to me.

Something he’d said before we went out shooting came back to me. I’d thought to say something at the time, but the course of the conversation put it out of my mind just then. He’d said that reloading was something he could do after a long, hard day, because it was monotonous. No, Young Grasshpper; one must be fully alert, with full faculties, when assembling ammunition.

The load that blew was part of a batch of the lightest load he’d brought that day (and therefore the most likely to be double charged without noticing). The others, which he’d fired first, all went off nicely, and velocities were right in the ball park for the caliber and loads. The one that blew left a number of fifteen hundred and change on the chronograph, numbers flashing, indicating a probable error. That’s closer to 44 Magnum territory, in a compact polymer pistol! I wouldn’t be surprised if that were close to actual velocity though, considering the effects it had on the launch system.

So it seems you CAN push a 40 Smith, 180, to 1500+ fps from a compact pistol, so long as you don’t mind it blowing the gun apart, turning various piece of the gun and cartridge case into dangerous projectiles, and bloodying you up a bit. Now you know.

I’m sure you’re jumping up and down at this point, yelling at your computer screen with the pertinent question; “But did he HIT the TARGET?”
Yes. Yes he did, and he walked away from it, and so it was a completely successful shot. So there.

He felt foolish, but I told him he should look at it as a gift. He’d gotten a valuable lesson he’ll certainly never forget, no one else was hurt, it wasn’t terribly expensive, AND he kept all of his body parts more or less intact. What more can one ask?