My Facebook page consists of links to all my blog posts automatically published by WordPress. A couple of friends from many decades back (it’s been 40 years since I’ve seen Ken) questioned my unsubstantiated claim that the cartoonist in this blog post was delusional to believe gun ownership rates were going up instead of down.

It is true that various polls give us the idea there is a slight downward trend. The following data is from Gallup: 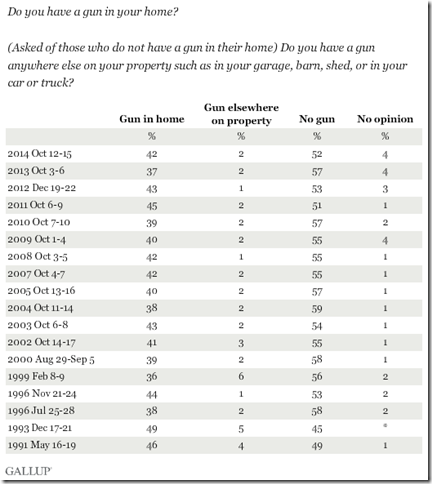 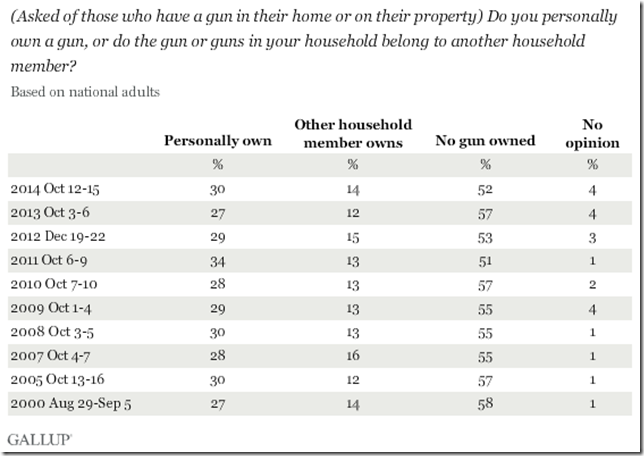 The cartoon in question was published in 2013. It could have been in response to Gallup’s annual poll.

As with all statistics there are errors. In many cases increasing the sample size will reduce the errors. In other cases changing your sample methods will decrease the errors. Many initial studies are done by grad students on fellow classmates in their college or university. The sample bias is obvious and many poll questions would be pointless in such an environment. There is also a danger of the respondent giving erroneous data and in some cases would also make many poll questions pointless.

For some polls there is little or no danger of getting erroneous data from the respondents. Asking someone their favorite color would be quite safe from this type of error. Asking if there is a wanted fugitive justice living in their home would be at extremely high risk from this type of error with a resultant bias toward “No” approaching 100%. Asking them if they are in an active homosexual relationship would probably have a mild bias in the “No” direction today but would have had much higher bias in the “No” direction 75 or 100 years ago.

It is the hypothesis of many people, myself included, that gun ownership polls suffers from a minor to moderate bias in the “No” direction today.

If you look carefully at the data above you will find something I think is very telling. Look at the rate of people that have “No opinion” in the tables above. I suspect this predominately represents those people that do own guns or have guns in their homes and do not wish to lie to the pollster. Notice how this was consistently 1% in the time frame 2000 to 2008 but came up after Obama was elected? A similar pattern shows up after his reelection in 2012. It is my hypothesis that most or perhaps all of this change is due to concerns that polls about guns could be used to build databases of gun owners for nefarious purposes by an administration hostile to gun ownership. This hypothesis is further supported by the data in the first table going back to the Clinton administration. It is also supported by public approval ratings of the NRA being in the 50+% range while government approval ratings are in the 10-% range.

I’ve made a case the “No opinion” data above reflects gun owners who own guns but aren’t willing to lie to the pollster. Now lets look at indications gun owners are lying and pushing the sample bias even further in the “No” direction.

It is well known that FBI NICS checks show dramatic increases in gun sales in recent years and only deviated from the upward trend slightly in 2014 (original here). The claim by anti-gun people is that the polling data demonstrates existing gun owners are purchasing more guns and that there are few new gun owners. Those of us close to the gun community strongly suspect this is false because of what we experience at gun stores, the ranges, and in our personal lives. The impression is there are a lot of new gun owners. But how can we quantify that and avoid our own confirmation, and other, biases?

One way to quantify it is through data from states that require registration of gun owners. Illinois is one such state. A Firearm Owner Identification (FOID) card is required for gun ownership. Here is what the State of Illinois says on their website about FOID cards:

Those are applications. It is unclear but it appears these applications do not include renewals. If true then January 2013 had nearly double the number of new gun owners apply that it had in January 2012. This cannot be attributed to growth in the state population:

Illinois is one of the slowest growing states in the US. Between 2000 and 2010, the population of Illinois grew by a mere 3.3%, compared to a national average US population growth of 9.7%.

Estimates for 2010 through 2014 indicate even lower growth rates.

There are also sources with more detailed information about FOID numbers. Even if FOID stats includes renewals it is conclusive evidence that the rate of legal gun ownership in Illinois is increasing, not decreasing.

Massachusetts has a similar Firearm Identification (FID) card but I was unable to find the numbers (Weer’d Beard gives us these which are consistent even if not complete). Ditto for California, New Jersey and (I stand corrected). If someone has those numbers please let me know and I’ll update this post with the additional data.

My conclusion is the polls on firearm ownership rates have a significant negative bias that distorts the true rates and that the true rate is much higher than it was 10 years ago. This is supported by the polls themselves, hard data from registration of gun owners, and proxy data. I have not been able to find any data with contradicts this conclusion.