I find this chart very odd (from Apart From Ebola (And Inflation), These Are The Greatest Dangers To The World): 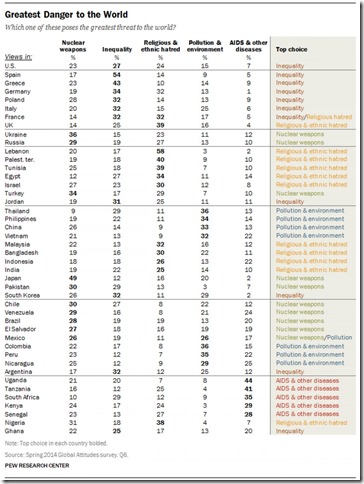 In the U.S. and several Western European nations what people consider the “greatest threat to the world” is “Inequality”. While many of the nations where I envision “inequality” being the most obvious, like India, Mexico, and South America, other issues dominate. Is it an expression of envy by people with worthless degrees or unable to graduate from high school seeking “social justice”? Are these people willing to bring chaos to the world because they believe they don’t get what they deserve? Or is this some sort of guilt for living in a relatively free society?

If guilt then I guess I don’t have any because if I were doing such a survey it would not have even crossed my mind to have that as one of the options.

6 thoughts on “Greatest danger to the world”