I just finished Emily Gets Her Gun: …But Obama Wants to Take Yours.

I had sort of followed her Washington Times series and hadn’t really planned on getting the book. I was sort of tempted when she won an award at the Gun Rights Policy Conference: 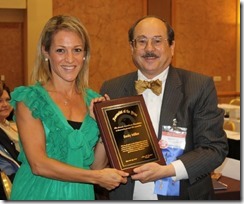 Finally I gave in and purchased the audible version so I could listen to it while driving. I’m not sure I should be driving when read it though. It generated a lot of adrenaline.

My thoughts on the book are that I’m going to do my best to avoid going to D.C. until you can get hunting tags for D.C. politicians and police.

The book should have a stronger title. Something like “The Most Dangerous City in the Nation is a Police State”. Or maybe “In D.C. Only Criminals and Cops Have Guns and You Can’t Distinguish Between Them.”

It is really, really bad in D.C. The roadblocks they put up to prevent you from getting or using a gun are bad enough. I knew about them and sort of accepted that is the way it is going to be until the Federal courts slap them down. But they way they treat gun owners even if you are within the law is criminal. The police have literally told gun owners, “I don’t have time for Constitutional B.S.” It’s not just the 2nd Amendment they despise. The ignoring of the 4th Amendment and due process is standard operating procedure.

The politicians and police committing these crimes cannot believe they are innocent of wrongdoing or protecting the innocent. Their actions are so atrocious that I’m serious when I say there should be hunting tags issued for them.

It will never happen you say? Hmmm…

How long was it from the time Saddam Hussein, his sons, and thugs were comfortable in their position of power in Iraq until they had “dead or alive” bounties on their heads? Maybe a year or two at most?

How long was it from the time Mussolini, Hitler, and their thugs were in comfortable positions power until they were hunted? Maybe a couple of years. And Hitler’s thugs were hunted for several decades after their crimes.

How long was it from the time Nicolae Ceauşescu and his thugs were comfortably in power until they were being hunted? If you are generous it was about two weeks.

I have to conclude that when the government is a police state things can change extremely rapidly. It just might be possible there will come a time, within my lifetime, when people will be able to get hunting tags for the thugs in D.C.

4 thoughts on “When will they issue tags?”