I’m setting aside the tears that come from looking at the pictures and reading the articles and just channeling “Spock” as best I can on something I know a little bit about.

The first thing I noticed from watching the video and then from the still photo I found at the Los Angles Times is that this looks like a crude homemade bomb. 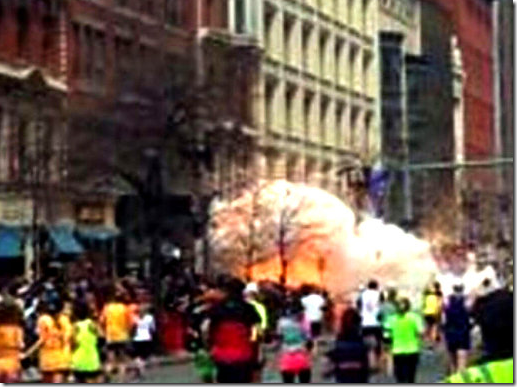 Here is a cropped version from the Boston Globe YouTube video: 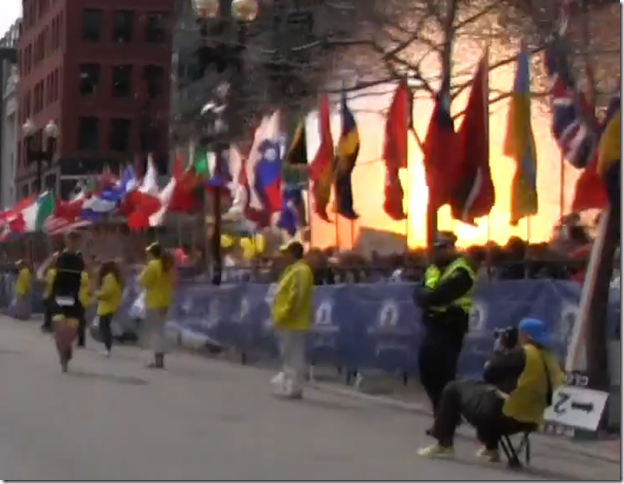 This is a full two seconds later from that same video:

See all that flame? And it looks as if there is still fuel burning in the cloud two seconds after the explosion.

I’m almost certain that no commercial or military explosive produces that much flame. Something like that would be totally banned in the mining industry.

That may mean there was a great excess of fuel in the explosive composition. Boomerite has an excess of oxygen which makes for easier detonation. Maximum power comes from a balance of oxygen and fuel. Some explosives are naturally oxygen or fuel rich. For example TNT is fuel rich. During WW II they would add ammonium nitrate which is (under the proper conditions) an explosive that is oxygen rich. The excess oxygen in the AN increased the power of the detonation by consuming the excess fuel of the TNT.

With that much flame persisting that long after the explosion occurred means huge amounts of power was wasted in light and relatively slowly expanding gases. This was not a military grade explosive. Getting the most bang for the least weight is worth the cost of getting the oxygen balance right.

This means it’s a homemade explosive.

Another possibility is that it wasn’t really a detonation at all but rather a deflagration. For example gun powders typically do not detonate. They “just” burn very rapidly. The flash you see at the muzzle of your gun at night (and sometimes even in bright sunlight) is composed mostly of burning particles of gunpowder. Confine the powder in a strong closed container, such as a pipe, and you get an explosion when the container bursts.

From the sound of the explosion and the speed of the blast product development I’m leaning toward a deflagration.

Mr. Completely sent me an email asking if I could “rule either in or out that readily available reloading powder could have been used”. My answer to that question is that I think it is definitely possible.

…the devices used gunpowder as the explosive and were packed with ball bearings and other shrapnel to maximise injuries.

Update April 16, 1:25 PM: Rick Boatwright has an excellent analysis which points to black powder being the explosive.