A long time ago Greg Hamilton said, “We’ll know the gun-grabbers have been put out of business when you can buy a blister pack of six Glock’s at Costco.”

We aren’t there yet but we are getting closer. Last night at Costco I saw blister packs of three “Tactical Flashlights”: 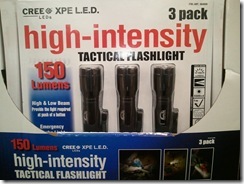 4 thoughts on “Blister packs at Costco”