In response to Juan’s claim Eric Shelton sent me an email: 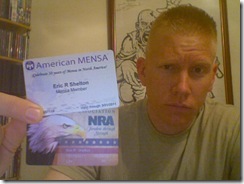 Juan, do you really want to go there? ‘Cause one of those cards says I’m a gun owner, and the other one says statistically I’m probably a fair bit brighter than you. Perhaps we’d waste less time if we had an IQ test before one were allowed to speak? You know, since we apparently have no problem infringing on the rights of others based on perceived intellect and all…

Don Kates pointed out as far back as 1994 the belief that gun owners are stupid uneducated yahoos failed reality tests when sociological studies demonstrated gun owners were actually better educated, had better jobs, and were only willing to use violence in defense of crime victims.

I cannot count the number of times I have been in conversations face to face or electronically with anti-gun people and had them “vapor lock” (as hazmat expressed it) after a question or two. In nearly all instance either they or someone else nearby declared “Reasoned Discourse!” and shut down the conversation to avoid excessive embarrassment to the anti-gun side of the discussion.

Last May when I had the chance to ask Paul Helmke a question I asked why he only talked about the rate of crimes where guns were involved. After all isn’t the total crime rate a better indicator of the effectiveness of restrictions on personal weapons? Because Alan Gura picked up the chase and took it in a slightly different direction I didn’t get a chance to respond to Helmke’s answer, “Our organization focuses on the one component of violence.” If I had been able to respond I would have pointed out, “The components of the crime vector are not orthogonal, hence you cannot consider them independently.” But he probably wouldn’t have understood anyway.