Via a Tweet from Sebastian I discovered Knife Rights just announced an important victory:

WE STOPPED CUSTOMS Pocket Knife Grab! The Senate has passed the conference report for the fiscal year 2010 Homeland Security Appropriations Bill with our amendment to the Federal Switchblade Act intact. The bill will now be sent to the President for signature. There is no indication that he would veto the bill.

This is the culmination of an incredible effort on the part of Knife Rights, American Knife and Tool Institute, NRA, Congressional Sportsmen’s Foundation, Citizens Committee for the Right to Keep and Bear Arms and many other organizations who contributed. Each organization made key contributions to the effort, without which the end result might not have turned out so well. Not many folks gave us much hope of succeeding when Customs first proposed revoking their rulings and redefining what is a switchblade back in May. At a time when bipartisanship is rare as hen’s teeth in Washington, we garnered support from both sides of the aisle.

We succeeded because the coalition of groups that came together to fight Customs represented a broad swath of American industry and grassroots. We succeeded in large part because of YOUR contributions, letters and calls in support of our efforts. You can give yourself a pat on the back for your effort and a job well done against all odds. It is time to pop the cork on that bottle of champagne and celebrate a victory for your knife rights and for all America.

To help you celebrate and commemorate this incredible victory, please purchase one of our collectible “WE STOPPED Customs Pocket Knife Grab” coffee mugs, t-shirts or sweatshirts, available for a limited time only: www.cafepress.com/KnifeRights Proceeds will help pay off the incredibly high cost of accomplishing this victory.

Knife Rights has quickly grown to become America’s largest grassroots knife owners organization. This latest fight against Customs Pocket Knife Grab has validated the power and importance of a dedicated grass roots organization in defending your knife rights. Now we have to finish paying pay for this effort. It took a great deal of money to accomplish all this. Carrying a fight like this to Washington cannot be done without lots of cash. The victory isn’t complete until we pay the bills. PLEASE CLICK HERE TO DONATE TO SUPPORT THIS SUCCESSFUL FIGHT FOR YOUR KNIFE RIGHTS!

Also of interest on that same page: 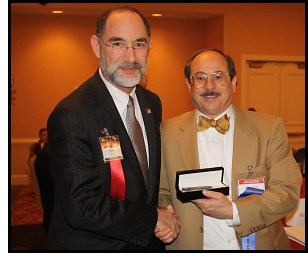 The weekend before last I was invited to speak at the annual Gun Rights Policy Conference put on by the Second Amendment Foundation and the Citizens Committee for the Right to Keep and Bear Arms. While I was there, I took the opportunity at their annual awards luncheon to make a special presentation to CCRKBA President, Alan Gottleib.

When this issue with Customs first reared its ugly head, Alan and the Citizens Committee were the first to step up in support of our efforts to achieve a legislative solution when it became clear that nothing else would work. CCRKBA helped to the tune of $30,000. Lest you think that covered all the expenses, let me assure you that it DID NOT, but it was a HUGE help. Alan also offered his wise counsel at critical junctures. In recognition of this major commitment, I was very pleased to present Alan with a custom Mini Eros Gentleman’s Tactical Folder generously donated by renowned knifemaker, and Knife Rights Cornerstone member, Ken Onion.

My remarks later in the day, which focused on the fact that the Second Amendment doesn’t say “firearms,” it says “arms,” apparently struck a chord with the nearly 700 participants. When it came time for resolutions, which guide the two organizations in terms of policy, my points were reflected in a historic change to one recurring resolution and the introduction and acceptance of a second.

The “Farmer” resolution was originally passed at the first GRPC twenty four years ago. This year it was amended to say that “an attack on any class of arms is an attack on all classes of arms,” in recognition that knives, as well as other arms, are due equal protection. This represents something of a watershed event for Second Amendment policy which heretofore has focused almost exclusively on firearms.

Jeff Knox of The Firearms Coalition was inspired to introduce a new resolution, which was adopted, that reads, “Whereas: The banning of any personal tool or weapon has never resulted in increased public safety,…We support the repeal of the Federal Switchblade Act and any other federal, state or local laws and regulations banning tools and weapons rather than addressing behavior.” Jeff’s heart is in the right place, we all know the Federal Switchblade Act was simply political theater and a sham, but the reality is that after 50 years as law of the land a legislative solution eliminating it is unlikely. However, it’s the thought that counts and it once again is indicative of a historic change in attitude. Jeff’s resolution is a strong statement of support for the concept that tools and weapons should not be blamed for social ills or criminal behavior and neither should they be regulated or banned for those reasons.

You can read the complete text of the two resolutions at: www.KnifeRights.org/grpc2009resolutions.pdf