As planned Caleb and I did some more tests with Ry’s test target. Video and commentary by Caleb.

We went to the Boomershoot site expecting to find little or no snow. We should have called ahead. There was about two feet of snow and we were unable to make it to the Taj Mahal with all our gear. We made do at the first berm. We used a paper target to zero the gun for this range (25 yards) then took a single shot with each caliber at the stack of steel plates at the base of the stump. The bullets at the steel plate went over the chronograph.

This was our setup. 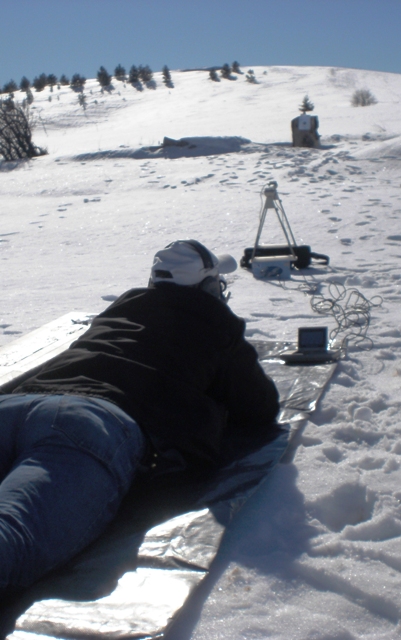 The .223 went through one and almost penetrated the second plate. The 30.06 went through three plates and partially into the fourth.

The .300 Win Mag pushing hand-loaded 162 grain military surplus black tip bullets was able to hit the target with a velocity of about 3315 fps. It went through all six plates:

Update: See also this paper on AP ammo. It’s just the first page (you have to pay for the rest of it) but it’s interesting reading.