Caleb and I loaded up about 500 rounds of .40 S&W for the practice and match last weekend. We shot up almost all of them too.

The load we used was 180 grain Montana Gold CMJ’s over 6.1 grains of True Blue using Winchester primers. I’m not entire happy with this load. There is enough room in the case it would be very easy to get a double charge in there. I wouldn’t be surprised if a triple charge would fit. A friend suggested Competition instead. I’ll probably pick up a pound to test out. I have used N350 (6.2 grains) for years and it’s a great powder but a bit expensive and hard to find. I was thinking True Blue would be my replacement but now I’m not so sure.

The Montana Golds sure are pretty: 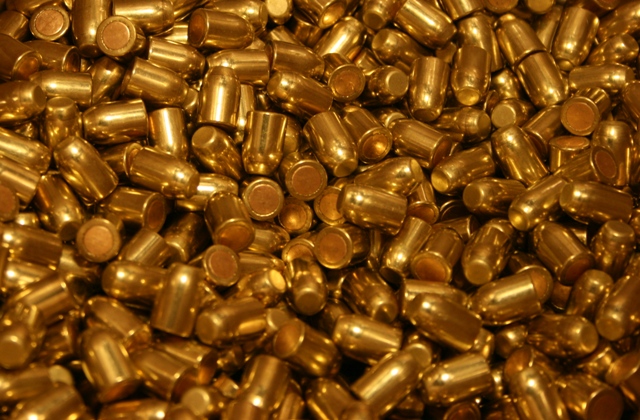 I have thousands of bullets to contribute to the cause. I went to Wade’s Eastside Guns today to pick up a few thousand primers but they don’t stock reloading components anymore. I’ll have to get them someplace else, I’m thinking Kesselring’s could use some of my business and they usually have N350 as well if the price isn’t too much different I’ll get a few pounds of N350 as well as a pound of Competition if they have it.

I hope the Brady bunch appreciates how much thought and effort I put into making this a special day.