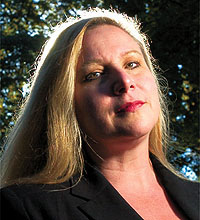 TORONTO — Wendy Cukier didn’t stand by and weep for the 14 young women who were murdered by a lone gunman on Dec. 6, 1989, in Montreal.

Instead, she formulated a plan to eradicate the use of illegal firearms, and has been working tirelessly towards that goal ever since.

The Ryerson professor, and founder and president of the Coalition for Gun Control, was lauded for her initiative 14 years ago when she was one of 10 winners at the Sun Media’s annual Women on the Move celebration in Toronto.

Today, Cukier is still a prof at Ryerson, as well as an associate dean of its business school, which is the largest business undergraduate school in Canada.

Cukier, mother to a 17-year-old daughter, says there’s still a lot of work to do in light of all the gunplay Toronto is witnessing.

“It’s important to continue the fight and ensure gun legislations that have been implemented are properly enforced, and not watered down,” says Cukier.

“It’s clear you can strengthen the laws in your own country, but if you are next to a country with as many guns as people and no effective gun control, you remain vulnerable,” she adds.

Currently, the dynamic activist is doing a lot of work at the United Nations level trying to establish international standards.

“Canada is often recognized as a model for other countries – they think we’ve done a good job. Amnesty International recognizes Canada’s gun laws as a model for preventing violence against women with guns,” says Cukier.

And even though there has been an increase in homicides by guns in Toronto this year, the death and injury rate by guns in Canada is at the lowest it’s ever been.

“Gang-related murders are definitely a problem and shows there is more work to do. Yet murders of women with guns is down 75%,” she adds.

“The big thing is, even though it’s been 16 years since the Montreal massacre, we’re still having to fight very hard to preserve the gains we’ve won,” says the author of The Global Gun Epidemic: From Saturday Night Specials to AK-47s.

“The gun lobby is fighting every step of the way and my message is for people … to speak out. Victims of violence and police officers are trying to get the attention of our politicians, but if the public doesn’t get engaged in the solution, then they become part of the problem.”

No mention of what really is important–the overall death and injury rate in Canada since they implement their “model” gun control.  Further questions include “How many people were injured or killed because they didn’t have the appropriate tool to defend themselves?”  And “Would the nearly two billion dollars spent on the failed gun registry have been better spent on more police officers, equipment, and prisons?”