Last Saturday I said I expected the range to be completed by the end of this week or early next week. I was on site yesterday and it only lacked rock and gravel which are being put down today (and possibly Monday).

Below are the latest pictures.

Here are Adam and Rodney (the contractors) on Wednesday discussing the plans for the day with the latest blocks scattered around them which Vicky had brought the night before.

About 40 minutes later they are placing the last of the available blocks.

Early Thursday morning we unloaded and placed the final batch of blocks Vicky delivered. I guided the final block into place as Tammy took pictures (which I don’t have yet). As the engine of the excavator was shut off the conversation went something like this:

Adam: We need to all bring our guns next week and do some shooting!

Rodney: What do you mean, “Next week?” I have mine in the pickup.

Tammy: I have mine too.

Joe (as I’m planting three steel USPSA Popper like targets in the berm): I have guns and ammo to share with everyone.

Less than 10 minutes after placing the last block we were making the steel ring with a suppressed .22 pistol and then a .40 S&W pistol. I was surprised at how well they all shot. I think there were only three misses on the USPSA Popper from about 30’ away with nearly 70 rounds fired.

I didn’t have my phone or camera and didn’t get any pictures of us shooting, but leaning against the left wall you can see the targets and the PVC pipe shooting boxes I made the night before. 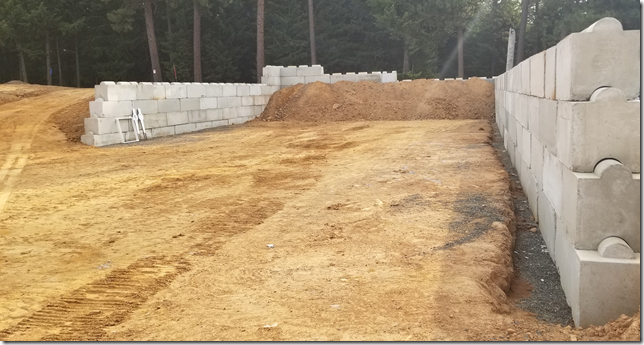 Here is what it looked like by the end of the day.

The resemblance to a castle is quite evident in these pictures.

Some people have suggested I paint the blocks yellow, red, blue, and green to make it look like Lego blocks. I declined. I prefer castle like.

I’ve been asked “How long is the range?”

The inside width of the blocks is 48’.

I designed it to accommodate all the Steel Challenge stages. “Speed Option” requires 42.5’ of width and 105’ of depth.