Barb and I know we have been extremely fortunate compared to a lot of people. Still, there are some things that have been depressing to me in the last month or so.

I didn’t know it until a couple days ago but Eric Engstrom died on the same day as Terry.

Eric had a larger impact on my professional life than anyone in the world. The impact was huge. I would never have gone to work for Microsoft if it hadn’t been at Eric’s urging. He knew I had written tons of assembly language code for various graphics boards. Eric needed people to write video drivers for Direct Video (as it was called in May of 1995) for Windows 95. It had to be done by August so game developers could have games ready for Christmas. That was the wildest ride I have ever been on. Read Renegades of the Empire. Whenever you read something in there that sounds too far out to be believable double the “far out” quotient and you will be in the ball park of reality. I saw a hole kicked in a wall when I reported a bug I had found and fixed. I didn’t create the bug, it was from the manufacture of the video board. It was extremely obscure and absolutely deadly when it showed up. And it wasn’t found until after the code had been “frozen”. I was there when a keyboard was repeatedly bashed against a desk at 3:00 AM. From my office the key tops falling to the desktop sounded like broken glass. The motorcycle, spinning it’s tire in the hallway, burned a hole through the carpet all the way to the concrete. There was the illegal fireworks on campus, the Humvee driven across the grass field on campus (and getting stuck there), and the persistent thief who kept stealing RAM out of our computers in the middle of the night making it problematic as to whether we would be able to work when we came in the next morning.

That was just the first few months of my time at Microsoft and with Eric in “full bloom”. After a few years I was his first employee for his first startup, Chromium Communications.

That path changed my life forever. I made at least twice as much, if not three times as much, money because of Eric. Working with Eric and others at Microsoft was an alternate reality for me. I had never met such smart people before. I was used to frustration at explaining the same things over and over to co-workers. During those first years at MS people would “get it” before I had finished my first sentence. That changed my standards for the type of working environment I was willing to be in.

On a personal level Eric was so incredibly funny and happy and could even find humor on the darkest of days when his companies were imploding during the dot com bubble implosion. His probably (you frequently couldn’t tell) insane ideas and ambitions were amazing. When I was working in Richland, WA I would drive 200 miles, one way, to have dinner with him in Kirkland, then drive back to Richland to go to work the next day. It was more than worth the drive.

I’m certain I thought of him at least once a week even though I hadn’t had contact with him for years. I kept putting “things on the list” I want to share with him. My accomplishments and bits of news or inside knowledge about things I knew he had an interest in.

Eric had a personality (and ego) which could fill the largest ballroom in the largest hotel. He could make you believe the impossible was not only plausible but he was going to do it and it was going to be FUN! He planned to live forever and I though he probably would succeed. He failed and the shock will be with me for a long time.

Then this morning, this is just minor punctuation mark on the 2020 ledge, some thief stole the presents from our font steps. Daughter Jaime had Amazon ship them to us and we didn’t notice they had been delivered last night. Amazon didn’t put them in the package box. I checked the video this morning and saw this: 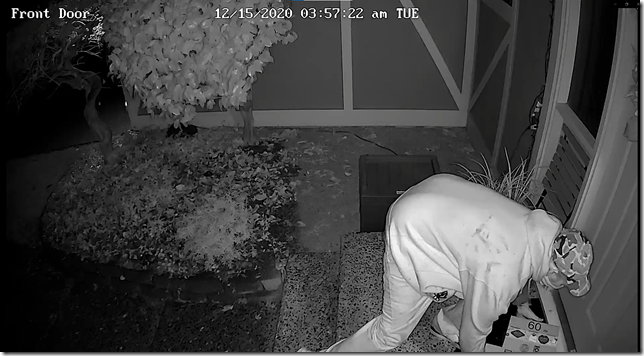 Package theft in Bellevue is up 72% last month compared to last year. We just contributed to the statistics for December.

I did get some good news late yesterday. Dad tried to buy a particular piece of prime properties to add to the farm on August 16, 1978. He was not successful. My brothers and I tried again in the early 1980s without success (the owner would barely talk to us).

In 2008 there was a verbal agreement between brother Doug and a third party. The third party wanted some of our land. Doug agreed that we would trade it for the land we really wanted. We knew the land we wanted was for sale but the owners wouldn’t have anything to do with us.

In May of this year, yes 12 years after the verbal agreement, they FINALLY, signed a contract to follow through with their verbal agreement. The contract said the deal would closed by November 29th. Uhh.. okay. That seems like an awfully long time to sign a few papers. We signed our papers in the middle of November. Wow! That took a long time (almost all of the hold up was on the side of the other party). But at least we are going to make the deadline. The other party still took what seemed like forever. Twice they sent papers to the title company without the signatures being notarized.

Yesterday the title company sent an email saying the papers had been recorded at the local courthouse.

It took over 42 years, but now we own that property. Maybe we can close out 2020 on a happy note.

Update: 12/15/2020 was also a good for another reason. I did the final review on a new patent application from the lawyer. I’ve solved tougher problems but I’m more proud of this patent application than any of the others. I thought of Eric a lot when working on this. Last January through March I worked an average 16 hours a day 7 days a week (except for a week in Hawaii for our first wedding anniversary) to find the solution and demonstrate its validity. I really wanted to tell Eric about this accomplishment.