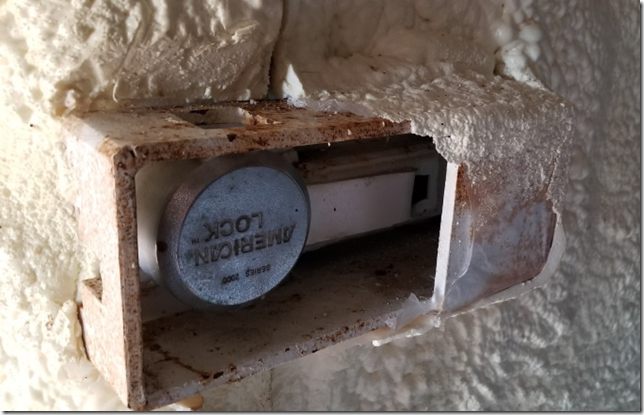 Many years ago I received a variance from the ATF on them. I recently changed the ownership and the ATF license from my dba FlashTek to  Boomershoot LLC. With that change, for some reason, the old variance did not transfer (I know, but remember, it’s a government rule. It doesn’t have to make sense). In the mean time there were additional rulings on the use of this type of lock. They clarified the requirements for the shrouds. I needed to improve them. I bought a cheap welder that could be operated by my 3kW generator and the steel to reduce the gap by 2.5”. I made the changes on Saturday without setting anything, or myself, on fire. There weren’t even any burn holes in my pants or minor skin burns.

The other issue was the top of the shipping container was in danger of developing leaks again. I strongly considered building some sort of covering over it myself but eventually decided I would rather have a professional take care of it in a more permanent manner. I received one bid by someone who proposed a sloped roof over the top which would have cost more than I originally paid for the container. Then another guy from Lewiston suggested a layer of plywood with TPO over the top and bid $1,700. I accepted and it was installed this weekend:

It should last 15 to 20 years as long as it doesn’t have a tree fall on it or something.

It is such a relief to get that done. It was really tough to even find someone to return my calls and now it is done before the fall rains and the heavy snow arrive.