One of our big joys was to see Mount Rainier up close with a “hat’”: Over 30% of the pictures Barb took are of this “hat”. Although my percentage is lower I took 27 pictures of the mountain with its “hat”.

Here you can see the beginnings of a second “hat”: 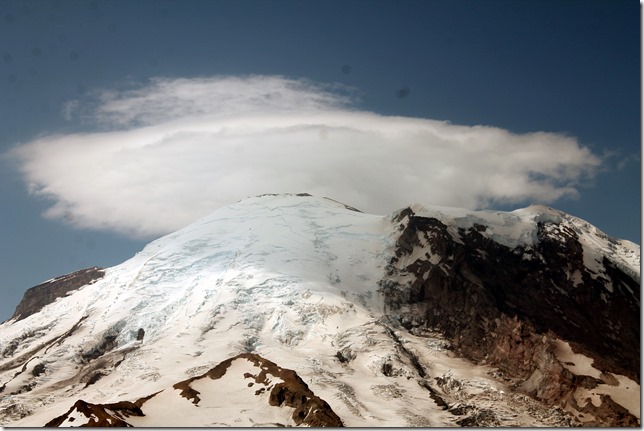 Also of interest is that the picture above was taken with a 55 mm lens. This is essentially the same view as you see with your naked eye. The peak of the mountain is over six miles away.

And here we have the fully developed second “hat:: 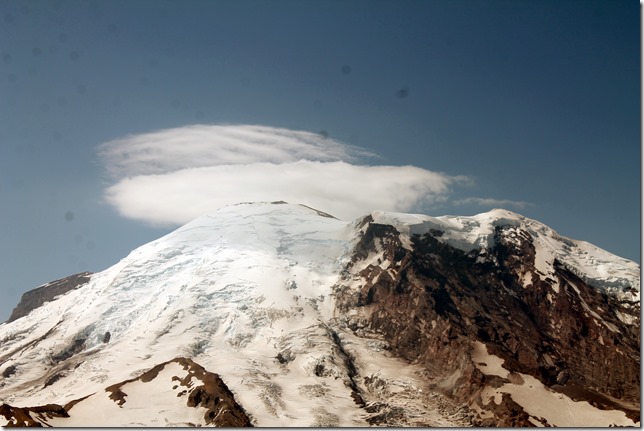 A “hat” forms fairly frequently but this was the first time we were in the park when it happened.

These pictures were taken on Friday as we were hiking the Mount Fremont Lookout Trail. The website says the trail starts at 6,400 feet elevation and we ascended 900 feet. But my GPS said the lookout was at 7,100 feet, not 7,300 feet:

Even at the parking lot at Sunrise Visitor Center the 6,400’ elevation was enough to nearly pop the bag of chips we brought:

There was at lot to see besides the “hat” on the mountain. We were high enough that even though it was the end of July we were could look down on patches of snow: 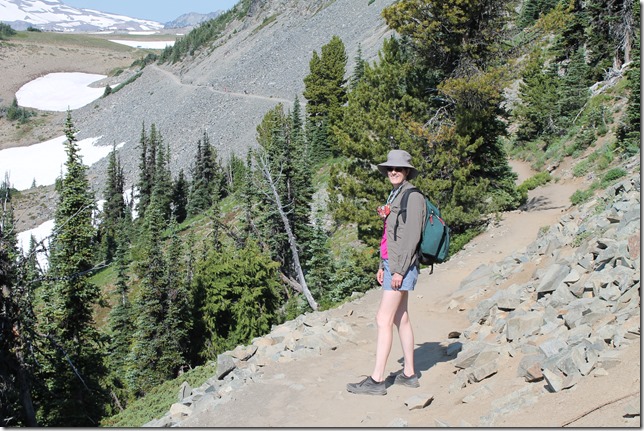 The pictures don’t do it justice but where the ice it met the water it was was incredibly blue: 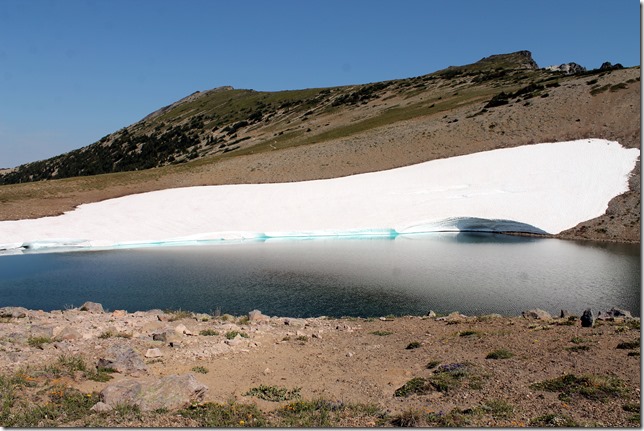 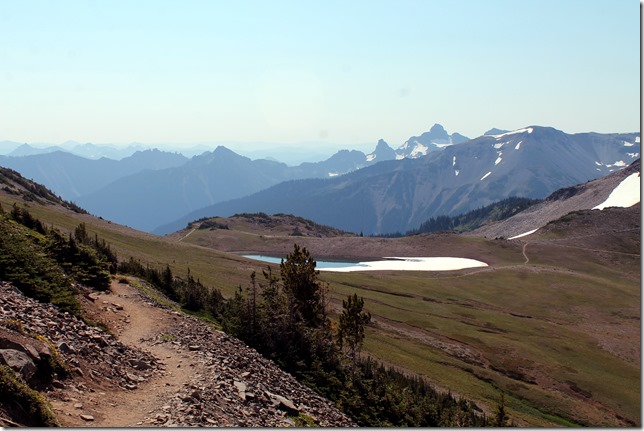 The lookout is in sight: 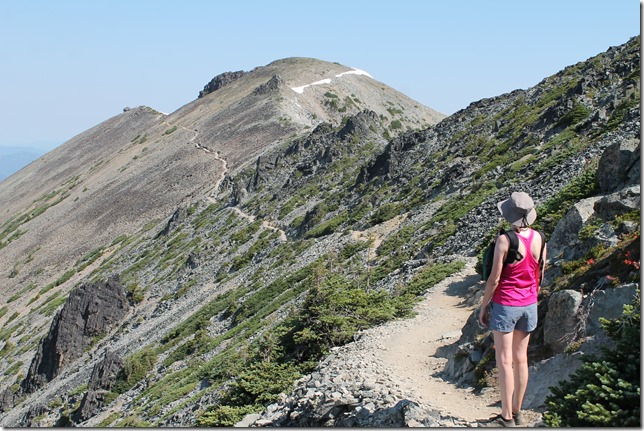 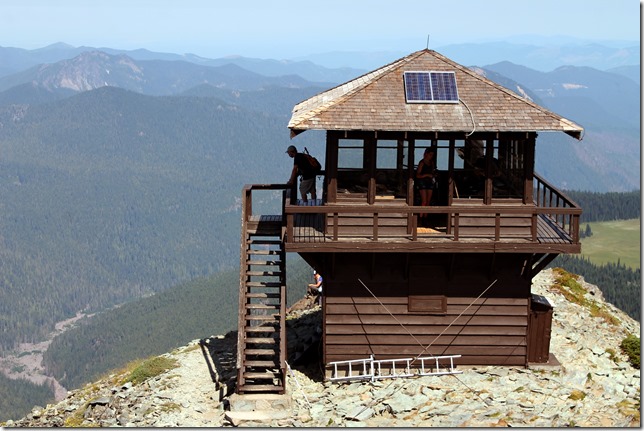 We ate lunch while at the lookup. The view was spectacular: 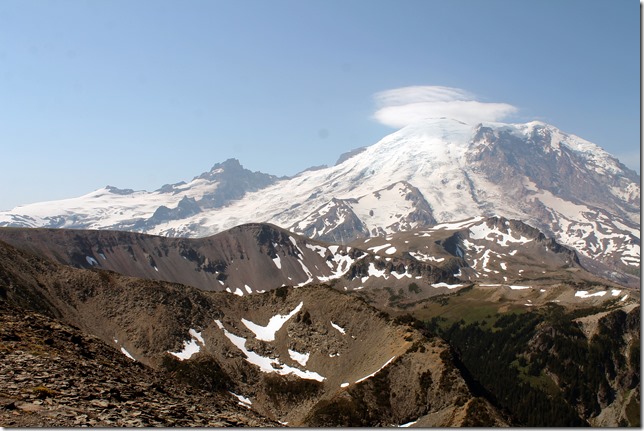 There was a chipmunk living inside the lookout which apparently was of the opinion that we should feed it: 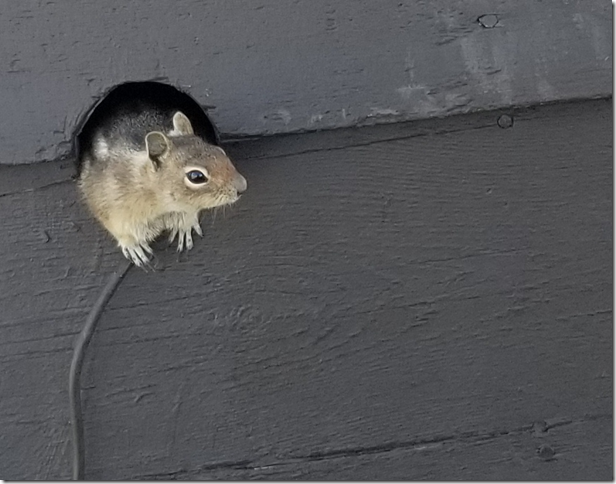 If you click to see a higher resolution image, in the picture below you can see two trails. One is headed up over the ridge toward Mount Rainier and one is headed down into the valley to the right. In 2015 we hiked the one headed down. Someday we will probably come back and hike the one going over the ridge.

Here is more of the trail going down into the valley: 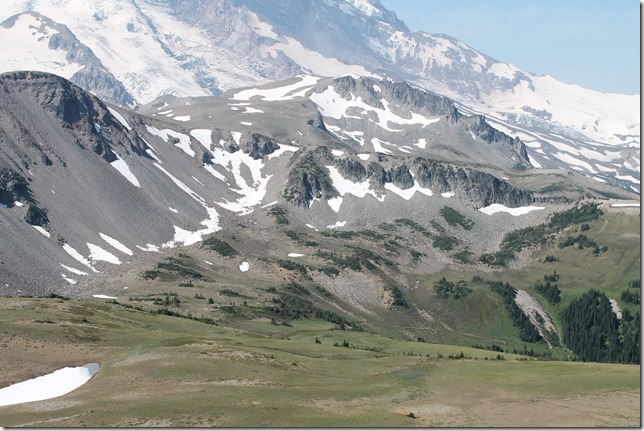 And to my left you can see more of the valley: 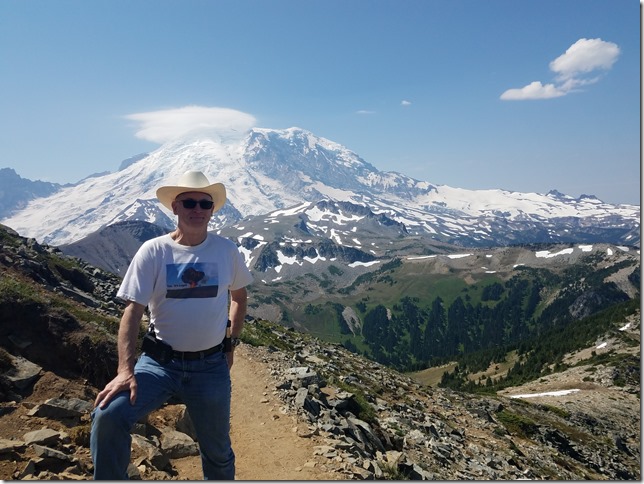 We were in the same campground, Ohanapecosh, this year as last but we had a different campsite. You can’t be very choosy because the campground reservations fill up shortly after they open nine months before your visit. We were still very pleased with what we got:

The tent site was far enough away from the road we had some privacy, the nearest neighbors were probably over 100 feet away, and the bathrooms and garbage dumpsters were directly across the road from us.

This is a good campground if you value isolation from other campers. Another campground we visited on Saturday, White River, was quite a bit closer to the Paradise and Sunrise visitor centers but the camp sites are much closer together and it’s close to a river with warning of floods, slides, and mud flows.

This will probably be our last extended visit to Mount Rainier for a while. We have hiked most of “the best” easy trails in the park. And we are thinking we will visit more of trails in the Olympic mountains before spending much more time on Mount Rainier.

10 thoughts on “The mountain has a hat”